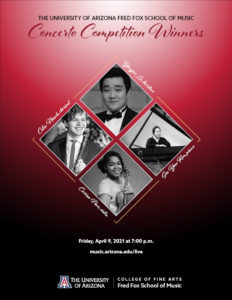 Yongjae Lee, South Korean baritone, received a bachelor’s degree in classical voice from Seoul National University (SNU) and a master’s degree in Voice Performance from Manhattan School of Music in New York. In 2018, he sang ‘Antonio’ in opera scene Le Nozze di Figaro in Act 4, in Sant’ Agata Feltria, Alfonsine, also ‘Sharpless’ in opera Madama Butterfly Act 3 in Teatro Sociale in Italy. In 2019, Mr. Lee performed the role ‘Betto’ in opera Gianni Schicchi, in Manhattan School of Music Green Field hall, and won the 1st Prize of ‘5th New York International Music Competition’ and got an ‘Edward C. Braunstein, New York Assemblyman Award’. He performed in ‘The 5th New York International Music Concours of Winner’s Recital’ at the ‘Bruno Walter Auditorium in Lincoln Center, New York. And he won the 1st prize of ‘Dr. Larry Day Memorial Voice Competition.’ in Tucson. He is a Winner of the President’s competition voice part in 2021. He appeared as ‘Peter,’ in the University of Arizona’s opera Hänsel und Gretel by Engelbert Humperdinck, and will appear as ‘Leporello,’ in Don Giovanni by W.A. Mozart. He will sing the ‘Peter’ in Chicago Summer Opera this year. He has participated in masterclasses with Thomas Hampson, Ian Bostridge, Michael Chioldi, and Rolando Panerai. He is currently pursuing a D.M.A of Voice and Opera, the Graduate Teaching Assistant at the University of Arizona, Fred Fox School of Music under Professor Yunah Lee’s tutelage.

Carissa Powe, an avid soloist, chamber musician, and music educator is currently pursuing her bachelor’s degree in violin performance at the University of Arizona under Professor Timothy Kantor. Carissa has received numerous awards locally and nationally, and made her solo orchestral debut at the age of 12 with the Tucson Symphony Orchestra. She has performed numerous times with the Civic Orchestra of Tucson, The Arizona Symphonic Winds, The Tucson Symphony Orchestra, and others. Carissa was selected for the inaugural season of Carnegie Hall’s NOY2 and was a semifinalist in the 20th Annual Sphinx Competition. Last fall, Arizona Arts Live featured her as a soloist as part of their at-home series in Centennial Hall. Carissa has participated in masterclasses with Martin Beaver, Elena Urioiste, Paul Kantor, and Vadim Guzmam. She enjoys chamber music and performs in a string trio with her brother and sister. They have received multiple awards and performed for many organizations and fundraisers such as the Mayor’s Council (city of Tucson), Raytheon, The Academy of Cancer Wellness and also opened for the Harlem Gospel Choir with the Gospel Music of America Tucson Chapter. In her free time, Carissa enjoys discovering contemporary classical artists, hiking, and spending time with family and friends.

Colin I. Nossek (b. 1999) is a composer and clarinetist dedicated to the creation of new, imaginative works that are accessible to a wide audience. He is currently studying at the University of Arizona Fred Fox School of Music under Dr. Yuanyuan HE (composition) and Dr. Jackie Glazier (clarinet). Nossek’s style is equally influenced by the classical tradition as well as bluegrass and folk music, which he was raised around for much of his early childhood. In his music, he enjoys exploring modern tonalities and techniques while incorporating triadic and diatonic material. A member of the LGBTQ+ Community, he believes in diversity and is always looking to perform new works by historically marginalized composers. Nossek has participated in the Arizona Symphony Orchestra and is a founding member of both the Vulpes Wind Quintet and the Avian Trio. Currently, he holds the position of principal clarinet in the UA Wind Ensemble.

Soo Yoen Kim enjoys a diverse career as a soloist, chamber musician, accompanist, orchestral player, and music educator. She has performed recitals at prestigious venues such as Carnegie Hall and Steinway Hall in New York and Centennial Hall in Tucson. She was one of the soloists of the Chopin 200th Anniversary Gala Concert at the World Financial Center, New York, and the opening concert at the Italy Music Festival in Lucca, Italy. She won the First Prize in the American Protégé International Piano Competition 2014 at Carnegie Hall in New York. In 2012, she was invited to participate the International Bösendorfer Piano Competition and the Second Prize Winner of the Louis Trester Competition 2014, Arizona, and the winner of the Duquesne’s Concerto Competition 2011 in Pittsburg. Before coming to the United States, she was the First Prize winner at the Korean Youth Piano Competitions. Soo Yoen received a bachelor’s degree in music from Yonsei University, Seoul, South Korea, a master’s degree in music from the Mannes School of Music, the New School, New York, and an Artist Diploma from Duquesne University, Pittsburgh. She worked as a teaching assistant at Duquesne University and the University of Arizona, and as an accompanist for the University of Arizona Opera Production, and Arizona Choir. Soo Yoen is currently studying with Dr. John Milbauer and finishing a doctoral program at the University of Arizona.