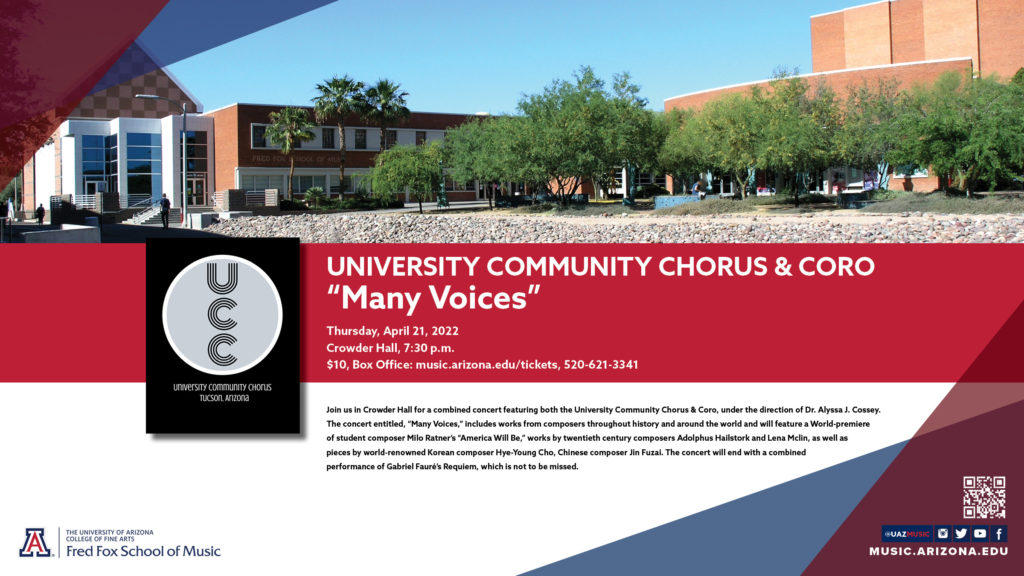 Join us in Crowder Hall for a combined concert featuring both the University Community Chorus & Coro, under the direction of Dr. Alyssa J. Cossey. The concert entitled, “Many Voices,” includes works from composers throughout history and around the world and will feature a World-premiere of student composer Milo Ratner’s “America Will Be,” works by twentieth century composers Adolphus Hailstork and Lena Mclin, as well as pieces by world-renowned Korean composer Hye-Young Cho, Chinese composer Jin Fuzai. The concert will end with a combined performance of Gabriel Fauré’s Requiem, which is not to be missed.

Marshall Adams (he/him/his) is a pianist and undergraduate student. He has received an Associates of Arts from Eastern Arizona College and is currently working towards a Bachelors of Arts in Music from the University of Arizona. Marshall is an experienced accompanist and collaborator. He has worked as a studio accompanist for vocal and instrumental studios and as a rehearsal pianist for productions of Joseph and the Amazing Technicolor Dreamcoat and Little Shop of Horrors. Marshall has had the honor of accompanying Coro and working with Dr. Cossey for the past three years. He is originally from northeastern Arizona in the White Mountains area. Outside of music Marshall enjoys baking, iced coffee, and sharing too many treats with his dog.

Dane Alexander Carten (he/him/his) is a first-year Master’s student working towards a degree in Choral Music Conducting. He holds two summa cum laude degrees in music – the Associate of Music Theory and Composition from Oakland Community College in Auburn Hills, Michigan, and the Bachelor of Music Education with a focus in Voice from Detroit, Michigan. Dane currently serves as Assistant Conductor of the Vail Chorale and Tenor Section Leader at St. Michael’s Episcopal Church in Tucson. Much of his formative teaching experience comes from building children’s choir programs in the Metro Detroit area, vocal/music directing community musical theater, and educating private students in voice, public speaking, guitar, piano, and ukulele.

Alyssa Cossey (she/her/hers)serves as Assistant Professor of Choral Music and Music Education at the University of Arizona where she conducts the University Community Chorus, Coro, and the Wildcat Choir. As a Los Angeles native, she sang in the premiere women’s chorus, Vox Femina Los Angeles, under the direction of Dr. Iris Levine, and has been invited to sing at venues including the Hollywood Bowl, the Pantages Theatre, and the Walt Disney Concert Hall with renowned conductors and composers including John Williams, Grant Gershon, and James Conlon. She is also an inaugural member of the professional-level women’s choir mirabai, which sings and tours under the direction of Dr. Sandra Snow, and can be heard on their debut CD “Ecstatic Songs,” released in March 2018. Previously, she taught middle and high school choirs in the L.A. area for nearly a decade. Dr. Cossey holds a DMA in Choral Conducting from Michigan State University, an MM in Conducting from California State University, Fullerton, and a BA from California State Polytechnic University, Pomona.

Mengda Jiang (she/her/hers) is a first-year doctoral student in Choral Conducting at the University of Arizona, where she is also minoring in Orchestral Conducting under the tutelage of Dr. Cossey, Dr. Schauer and Dr. Cockrell. Currently, Mengda is the assistant conductor of the University Community Choir (UCC). Mengda has a degree in Applied Chemistry from the University of Science and Technology in Beijing and a Masters Degree in Choral Conducting from the China Conservatory of Music. She has performed in the National Center for the Performing Arts, Forbidden City Concert Hall, Beijing Concert Hall, Qingdao Opera House, and Gulangyu Concert Hall. Mengda has worked with choirs of all ages including the: Feitian Singers of ASEE, BUAA who won the University and College Choirs Gold II at the Olympic Chorus Festival, Sochi, Russia, and the Silver Medal in the Adult Mixed Chorus category at The 4th Chorus Heart International Chorus Festival, Shanghai, China. She has also led the Percussion Group, China University of Geosciences in winning the Gold Medal for Chinese Traditional Group Percussion at the 2018 Beijing Student Art Exhibition.

Mirae Lee (she/her/hers) ​​is a conductor, music educator, composer, and pianist. Her conducting experience includes children’s, church, community, collegiate, and professional choral settings. Lee is the Director of the Choir at Voices in the Oaks Chorale in Oracle and Apple Tree Church in Tucson. She is a doctoral candidate in the Choral Conducting program at the University of Arizona and her doctoral research is focused on twenty-first century female Korean composers. Lee is expecting to graduate this summer.

Bulgarian pianist Ina Selvelieva (she/her/hers) has performed as soloist with many orchestras and has appeared in numerous solo and chamber performances in her native country, as well as in Austria, Germany, UK, Italy, Romania, Serbia, Colombia, and the United States. She has won numerous competitions both in Bulgaria and the United States, including the University of Wisconsin-Madison Symphony Orchestra Concerto Competition, and the UW-Madison Beethoven piano competition. Her awards include the Pancho Vladigerov Competition in Bulgaria, the Grand Prix at the International Competition “Earth and People” in Bulgaria, and the Artist Presentation Society Award in St. Louis, Missouri, among others.

Under the guidance of Christopher Taylor, Ina Selvelieva earned the Doctor of Musical Arts degree in piano performance at UW-Madison in 2007. Since then she has served on the faculty at St. Olaf College, UW-Madison, and Southern Illinois University Carbondale. She has presented master classes throughout the world, including Universidad de Antioquia, Medellin, Colombia; Universidad Nacional de Colombia – Conservatorio de Musica, Bogota; Xavier University of Louisiana, San Antonio College, and Stephen F. Austin State University, TX.

Her work as a collaborative pianist has taken her to festivals and summer camps, such as the Aspen Music Festival, American Institute of Musical Studies in Graz, Austria, and Interlochen Arts Camp. As a rehearsal pianist, Ina has held the Sir John Fisher Foundation Junior Fellow – Repetiteur position at the Royal Northern College of Music in Manchester, UK. In 2015 she made her debut with the Scottish Opera as the Music Director and Pianist of the “Opera Highlights” Tour, and as a rehearsal pianist for the premiere of the opera “Pleasure” by Mark Simpsons with Opera Leads, UK. She has also worked as a Solo Repetiteur at the Wuppertal Opera in Germany. In addition, she enjoys working as an Assistant Director of the Allegra Academy and Festival in Bulgaria.