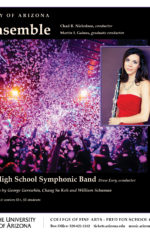 The University of Arizona Wind Ensemble will perform their last concert of the academic year on Thursday, April 26, 2018 at 7:30 p.m. in Crowder Hall. The featured soloist is faculty artist Jackie Glazier, clarinet. The Casteel High School Symphonic Band has been invited to perform the opening of this dinamic concert.

The highlight of this performance is faculty artist Jackie Glazier, clarinet, in Scott McAllister’s “Black Dog.” Showcasing the clarinetist as a rock star soloist, this dazzling concerto is inspired by the music of Led Zeppelin.

Other works to be performed in this program include George Gershwin’s “An American in Paris,” “Lament for Wind Orchestra” by Chang Su Hoh and “Be Glad Then, America” by William Schuman.

The Wind Ensemble is under the direction of Chad R. Nicholson, director of bands. Doctoral student Martin I. Gaines will also conduct the ensemble in this program. The Casteel High School Symphonic Band will perform under the baton of their conductor, Drew Eary.

A versatile artist, Jackie Glazier is an active soloist, chamber musician, orchestral clarinetist, pedagogue, and advocate of new music. Dr. Glazier was appointed assistant professor of clarinet at the University of Arizona Fred Fox School of Music in 2016. Solo performances and chamber music performances have taken Jackie throughout the United States and Europe. Jackie gave the world premiere of Scott McAllister’s “Concerto Americana,” which led to subsequent performances, including the College Band Directors National Association Conference. She also performed John Veale’s clarinet concerto with the Ocala Symphony for the opening concerts of their 2016-2017 subscription series.

An accomplished chamber musician, Jackie was selected as a finalist in the prestigious international 2016 Chesapeake Chamber Music Competition with the Cerulean Trio. She has performed as a chamber musician in the Netherlands, Luxembourg, France, Carnegie Hall’s Weill Recital Hall, and numerous chamber music series throughout the United States. Jackie is a founding member of Duo Entre-Nous with Don-Paul Kahl, a saxophone and clarinet ensemble dedicated to the progression of new music. Duo Entre-Nous has performed internationally and commissioned several works for the repertoire from composers in North America, Australia, France and Argentina.

Jackie performed regularly with the Orlando Philharmonic as principal, second, and E-flat clarinet from 2011 to 2016. She was appointed principal clarinet of the Ocala Symphony, where she served from 2012 to 2016. She currently performs with the Tucson Symphony and the Grammy Award-nominated True Concord Voices & Orchestra. Orchestral collaborations include many internationally renowned artists such as Renée Fleming, Joshua Bell, and Yefim Bronfman. Jackie was the first-prize winner of the International Clarinet Association Orchestral Competition at ClarinetFest 2014.

An active clinician and educator, Dr. Glazier has presented guest master classes at major universities throughout the United States. She has earned degrees from Cincinnati College-Conservatory of Music, University of Florida and Florida State University. Her teachers include Richie Hawley, Karl Leister, Mitchell Estrin, Deborah Bish, Ixi Chen and Jonathan Gunn. Jackie is a Vandoren Regional Artist and presents educational clinics throughout the state of Arizona. 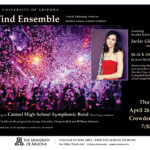