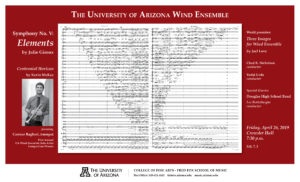 The University of Arizona Wind Ensemble will perform their last concert of the academic year on Friday, April 26, 2019 at 7:30 p.m. in Crowder Hall. The featured soloist is the winner of the First Annual UA Wind Ensemble Solo Artist Competition, Connor Bagheri, trumpet. The Douglas High School Band has been invited to perform the opening of this dynamic concert.

The Wind Ensemble is under the direction of Dr. Chad R. Nicholson, director of bands. Professor Yudai Ueda will also conduct the ensemble in this program. The Douglas High School Band will perform under the baton of their conductor, Lee Bottelberghe.

The University of Arizona Fred Fox School of Music is proud to announce the winner of the First Annual UA Wind Ensemble Solo Artist Competition. This competition was open to undergraduate and graduate students in the woodwind, brass, and percussion studios, and there were several outstanding performers. The 2019 winner is Connor Bagheri, a sophomore trumpet player, who will perform Kevin McKee’s “Centennial Horizon” for trumpet and wind ensemble. The concert will take place on Friday, April 26, 2019 at 7:30p.m. in Crowder Hall. 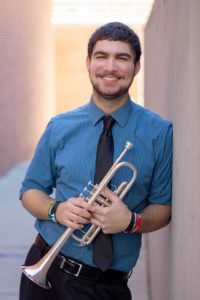 Connor Bagheri is a second year undergraduate student of Professor Jason Carder at the University of Arizona. From San Marcos, California, Connor started playing trumpet in the sixth grade beginning band. Four years later he began studying with Frank Glasson of the San Diego Symphony. During high school, he took lessons with critically acclaimed players such as John Wilds, Rob Frear, Jim Wilt and Thomas Hooten. Connor has participated in the chamber music portion of the Music for All National Festival in Indianapolis, and was a member of the California All-State Wind Symphony in 2017. He has played in master classes held by David Evans, Micah Wilkinson, Joe Burgstaller and Pacho Flores.