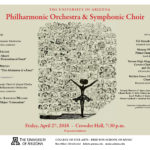 The University of Arizona Philharmonic Orchestra and UA Symphonic Choir will present a combined concert on Friday, April 27, 2018 at 7:30 p.m. in Crowder Hall.

The first part of the program, under the baton of doctoral conductor András Derecskei, will feature “Hungarian March” from “The Damnation of Faust” by Hector Berlioz and Claude Debussy’s “Prelude to ‘The Afternoon of a Faun.'”

The University of Arizona Philharmonic Orchestra is one of the large ensembles vital to the educational and artistic mission of the University of Arizona Fred Fox School of Music. In its ranks are music majors and minors, as well as many students and other members of the UA community. The Philharmonic performs a cross-section of the orchestral repertoire in a number of concerts each year. The ensemble performs under the baton of doctoral students András Derecskei and Juan Montoya, under the direction of Dr. Thomas Cockrell, director of orchestral activities. (This program will be conducted by András Derecskei.)

Symphonic Choir, the select undergraduate ensemble at the University of Arizona, carries on a sixty five-year tradition of choral excellence. In addition to performing formal concerts on campus, on Tucson-area concert series, and on tours throughout the Southwest, the choir collaborates with university and professional ensembles, including on performances of Bach “Matthäuspassion” and Brahms “Ein deutsches Requiem” (University of Arizona), Mahler’s Symphony No. 2 (Tucson Symphony Orchestra and Chorus) and Mozart Requiem (University Community Chorus and Orchestra). Students represent a broad variety of disciplines and hail from throughout the United States. The group’s repertoire embraces music from many cultures and from every historical period up to and including premières of new works and those commissioned especially for the choir. The ensemble was recently honored to perform for the 2014 and 2010 Western Divisional Conferences of American Choral Directors Association, the 2012 Pacific-Southwest Regional Conference of College Music Society and the 2011 Annual Conference of Arizona Music Educators Association.  In 2017, the ensemble also was awarded second place in the American Prize Choral Competition for the college/university division. Dr. Elizabeth Schauer, professor of music and associate director of choral activities, is in her fourteenth year as conductor of Symphonic Choir.