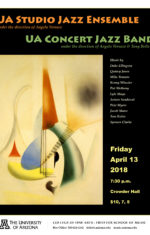 The University of Arizona Studio Jazz Ensemble and Concert Jazz Band will present their spring concert in Crower Hall on Friday, April 13, 2018 at 7:30 p.m.

The UA Concert Jazz Band is under the direction of Angelo Versace and Tony Belletti. They will open the concert with works by Duke Ellington, Quincy Jones, Pat Metheny, Lyle Mays, Mike Tomaro, and Byers.

Please join us on Wednesday, April 18 for the last UA jazz concert of the academic year, featuring The Experiential Ensemble and Fred Fox Jazz Ensemble. The groups will be performing original compositions and arrangements.

Jazz pianist Angelo Versace has been the director of jazz studies at the University of Arizona since 2014. He attended William Paterson University from 2004 to 2008, studying with Mulgrew Miller, a seminal figure in jazz and a man whom Versace cites as being a main musical influence. He subsequently earned his Master of Music and Doctor of Musical Arts degrees from the University of Miami, studying jazz piano, jazz pedagogy, composition, and arranging.

During his time in Miami, Versace was on faculty at the Superior Academy of Music – an award-winning institution backed by the Royal Conservatory Music Development Program. He also worked closely with two high school jazz band programs, which found success at the prestigious Essentially Ellington competition: CGCC Community Arts Program and Dillard High School. He began to work for the Tucson Jazz Institute (the two-time winner of the Essentially Ellington competition) after his move to Arizona in July of 2014.

Dr. Versace has been contracted as a performer, teacher, composer, arranger, producer, music director, and an engraver. From 2009 to 2013 he held the piano chair in the Mancini Institute Orchestra, a “multi-genre ‘cross-over’ orchestra” under the direction of Terence Blanchard. He currently tours extensively with Khristian Dentley, and is preparing for two upcoming record releases.  The first is a collaboration with Mr. Dentley, titled “Easy Simple Life.” The second will be the release of his first record as a leader, “My Refrain,” and will feature Brice Winston.