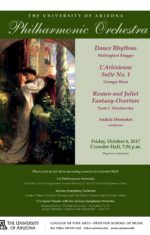 The University of Arizona Philharmonic Orchestra will present a concert on Friday, October 6, 2017 at 7:30 p.m. in Crowder Hall. Conducted by doctoral student András Derecskei, the orchestra will perform “Dance Rhythms” by Wallingford Riegger, Suite No. 1 from “L’Arlésienne” by Georges Bizet and Pyotr Ilyich Tchaikovsky’s Romeo and Juliet Fantasy-Overture.

The University of Arizona Philharmonic Orchestra is one of the large ensembles vital to the educational and artistic mission of the University of Arizona Fred Fox School of Music. In its ranks are music majors and minors, as well as many students and other members of the UA community. The Philharmonic performs a cross-section of the orchestral repertoire in a number of concerts each year. The ensemble performs under the baton of doctoral students András Derecskei and Juan Montoya, under the direction of Director of Orchestral Activities, Dr. Thomas Cockrell. This program will be conducted by András Derecskei.

András Derecskei was born in Budapest into a family of musicians. He subsequently received three master’s degrees from the Liszt Ferenc Academy of Music in violin (cum laude), composition and conducting. He has guest conducted the Győr Philharmonic Orchestra, Szeged Symphony Orchestra, Anima Musicae Chamber Orchestra, Vespro Chamber Orchestra and Choir, Lavotta Orchestra, Ciuc Chamber Orchestra among others. He served as the assistant conductor of the Szolnok Symphony Orchestra from 2012 to 2014. As a composer and as a chamber musician Derecskei has been a prize winner of numerous competitions including the Hungarian National Chamber Music Competition (grand and first prize), Liszt Academy Composition Competition (first prize and Attila Bozay Special Award), Leó Weiner Chamber Music Competition (second prize), Budapest Spring Festival Fugato Foundation Competition (second and public’s prizes) and the International Janáček String Quartet Competition (third prize). In September 2015 he was a prize winner in the Crossover Competition in Mannheim, Germany. Derecskei has been featured on the Hungarian National Television and Radio several times and has received a Zoltán Kodály Composition Fellowship three times. His compositions have been performed almost all over the world. Derecskei is currently pursuing a Doctor of Musical Arts degree in orchestral conducting at the University of Arizona with Dr. Thomas Cockrell, where he serves as a conductor of the UA Philharmonic and assistant conductor for the Arizona Symphony Orchestra.