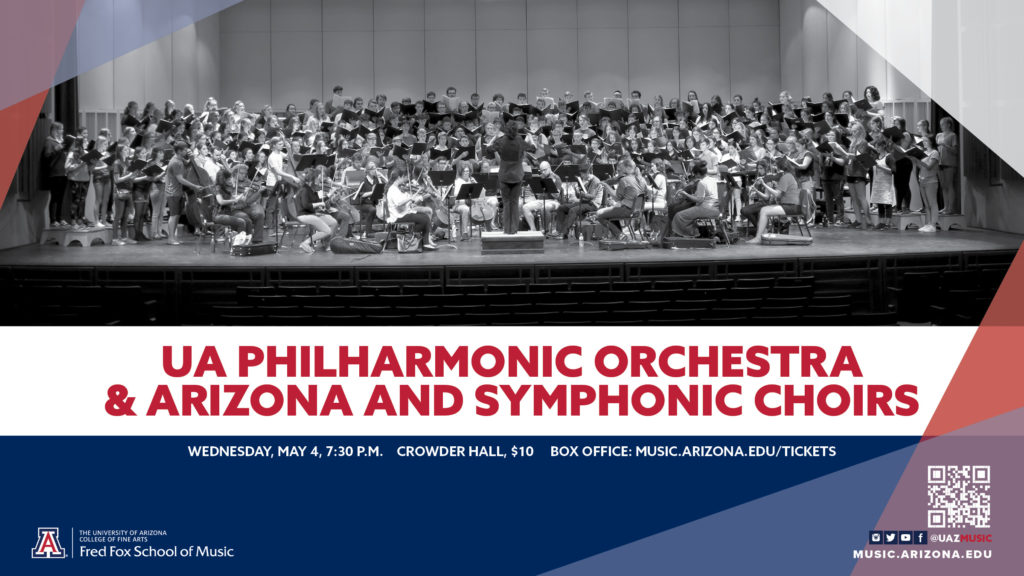 Arizona and Symphonic Choirs and the UA Philharmonic Orchestra will join forces to present an all-Mendelssohn concert on Wednesday, May 4 at 7:30 p.m. in Crowder Hall. The program will open with Overture in C Major for Wind Instruments, op. 24 “Nocturno,” conducted by doctoral student Lorena Suárez. This virtuosic ten-minute work for chamber winds was originally composed in 1824 when Felix Mendelssohn was only 15 years old, then lost, and then re-created two years later in the version that will be presented on this performance. Doctoral student Yudai Ueda will conduct Mendelssohn’s lively and engaging Sinfonia XII, one of twelve string “symphonies” composed when Mendelssohn was only 14 as a composition assignment. Likely intended for a small group of players for home use or performance for musical soirees, the work shows the influence of Bach, Mozart and Haydn, who were favorites of Mendelssohn’s teacher, Carl Friedrich Zelter. The concert will conclude with Mendelssohn’s lush setting of Psalm 42, conducted by Dr. Elizabeth Schauer, Director of Choral Activities at University of Arizona. Performed by the full orchestra together with the combined Arizona and Symphonic Choirs and soprano soloist Bethany Jargstorf, this work features Martin Luther’s German translation of the poignant psalm. Critic and composer Robert Schumann claimed that this work represented the highest point Mendelssohn reached as a composer for the church, and Mendelssohn himself held it in higher regard than most of his other compositions.