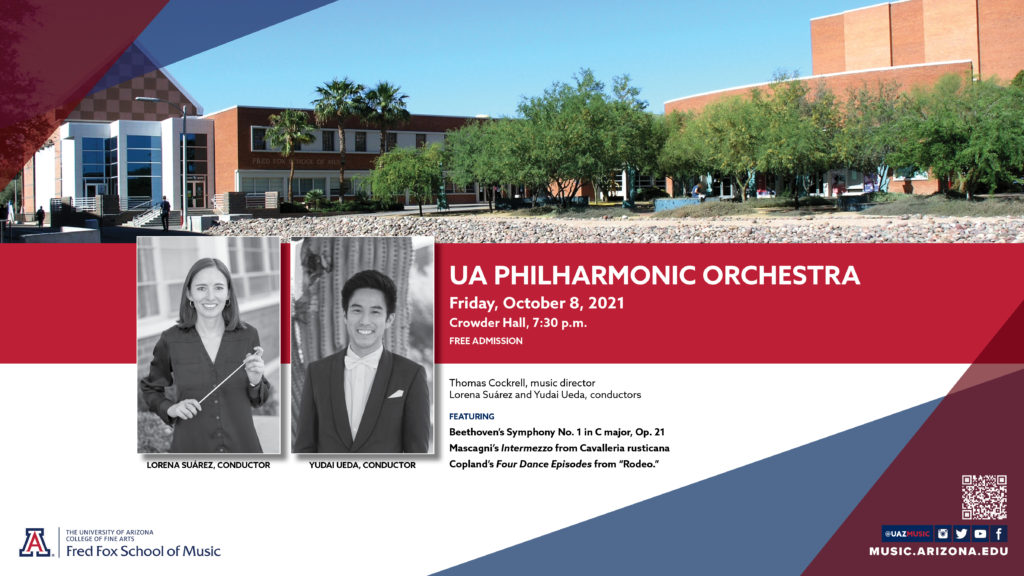 LORENA SUÁREZ is a third-year doctoral student at the University of Arizona Fred Fox School of Music, majoring in orchestral conducting under the tutelage of Dr. Thomas Cockrell.  She serves as a graduate teaching assistant for the UofA Orchestras; she is conductor of the UA Philharmonic and assistant, librarian, and manager of the Arizona Symphony. In the spring 2021, she was assistant conductor and chorus master for UA Opera Theater production of Mozart’s Don Giovanni. She also serves as music director for First United Methodist Church of Tucson.

Ms. Suárez holds a Master of Music degree in orchestral conducting from the University of Minnesota Duluth, where she studied under the guidance of Maestro Rudy Perrault, and worked at the Music Department and the Fine Arts Academy as piano and guitar teaching specialist. While in Minnesota, she served as assistant conductor of the Duluth Superior Symphony Orchestra under the mentorship of Dirk Meyer. In the summer of 2020, she was chorus master for Tosca at the Northern Lights Festival.

Prior to her graduate studies in the United States, Ms. Suárez earned a bachelor’s degree in orchestral conducting from Conservatorio Luigi Cherubini di Firenze in Italy, where she also studied choral conducting and vocal composition and conducted the youth orchestra and wind band. In Italy, Lorena was conductor of the Piccola Orchestra delle Favole in Florence, as well as assistant conductor to Johanna Knauf at Coro ed Orchestra Desiderio da Settignano and to Francesco Rizzi at Conservatorio Luigi Cherubini.

In her native Ecuador, Lorena Suárez earned a bachelor’s degree in jazz piano performance from Universidad San Francisco de Quito, as well as diplomas in classical piano and guitar from Conservatorio Jaime Mola in Quito. As a pianist and guitarist, she has performed with big band and chamber groups and as a soloist.

Most recently, Ms. Suárez was assistant conductor for a full production of Die Fledermaus at the Berlin Opera Academy, in Kandersteg, Switzerland.

YUDAI UEDA is currently an orchestral conducting doctoral candidate and the Nelson Riddle Graduate Assistant at the University of Arizona. His responsibilities include conducting the UA Philharmonic Orchestra and assisting with the Arizona Symphony Orchestra and Opera.

Ueda also conducts LendAnEar and has been the music director since 2017. This group performs repertoire for various combinations of instruments, such as Mozart’s Gran Partita, Dvořák’s Serenade for Winds, and other works by Beethoven, Cage, Marquez, Mazzoli, Mendelssohn, Strauss, Stravinsky, and Villa-Lobos. In addition, Ueda has conducted the Tucson Repertory Orchestra regularly since 2017 as a guest conductor.

From 2015 to 2021, Ueda served on the faculty at the Fred Fox School of Music at the University of Arizona. Duties included directing bands and teaching conducting, music education, and leadership. For community outreach, he frequently visited other schools as a clinician-conductor, judged for music festivals, gave presentations at various conferences, and started the annual UA Conducting Workshop and UA Regional Etude Workshop.

Before starting the doctoral conducting program, Ueda studied orchestral conducting in New York and Vienna. After a conducting fellowship in Vienna, he served as the director of the orchestra program for the Vienna Summer Music Festival and as an assistant conductor for operas Suor Angelica and Gianni Schicchi by Giacomo Puccini and Die Fledermaus by Johann Strauss II.

Ueda received his Master of Music in Instrumental Conducting and Bachelor of Music Education from Northern Arizona University. He is currently studying orchestral and opera conducting with Dr. Thomas Cockrell.