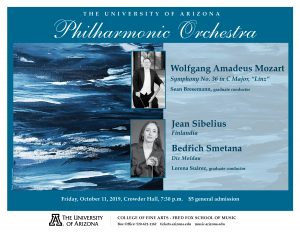 Sean Peter Bresemann is a second-year doctoral orchestral conducting student at the University of Arizona where he studies with Dr. Thomas Cockrell. Sean was recently invited to conduct the Vidin Sinfonietta as part of an advanced conducting workshop in Vidin, Bulgaria. He has also been a conducting fellow at the Eastern Music Festival in 2015 and 2016, where he conducted in concerts and worked in master classes led by Maestros Gerard Schwarz, Grant Cooper, José-Luis Novo and Eric Garcia. He holds a Bachelor of Music degree in horn performance from the University of Cincinnati College-Conservatory  and a Master of Music degree in orchestral conducting from the University of North Texas where he studied with David Itkin.

Lorena was assistant conductor of the Duluth Superior Symphony Orchestra under the mentorship of Dirk Meyer. While at UMD, she also worked at the Music Department and the Fine Arts Academy as piano and guitar teaching specialist. While in Italy, Lorena was conductor of the Piccola Orchestra delle Favole in Florence. She was assistant conductor to Johanna Knauf at Coro ed Orchestra Desiderio da Settignano and to Francesco Rizzi at the Conservatorio Luigi Cherubini. As a pianist and guitarist, Lorena has played with big band and chamber groups, as well as a soloist in her native Ecuador.

Student Spotlight!
Violist Raiden Thaler is pursuing a Master of Music degree at the University of Arizona under the tutelage of Dr. Molly Gebrian. He recently graduated from Florida State University magna cum laude as a National Merit Finalist majoring in viola performance, where he studied under Dr. Pamela Ryan. Raiden has completed additional solo and chamber studies with Charles Castleman, Patricia McCarty, George Taylor, John Kochanowski, Basil Vendryes, Corinne Stillwell, Greg Sauer and Tomoko Fujita. He has performed solo works in masterclasses with Bruce Owen, Csaba Erdélyi, Erika Eckert, Catharine Carroll Lees, and both Almita and Roland Vamos at the 2018 ASTA National Conference. Chamber masterclasses include the Badke Quartet, the New Zealand String Quartet, Thomas Kraines of the Daedalus Quartet, and the Telegraph Quartet. Raiden has also studied at numerous summer and winter festivals, including Castleman Quartet Program, Lyricafest, Kinhaven Young Artist Seminar, Meadowmount School of Music, and the Ithaca College Summer Music Academy. Currently, he is principal viola of the Arizona Symphony Orchestra and a new member of the Grove String Quartet, the Graduate String Quartet at the University of Arizona under the mentorship of Professor Tim Kantor.
... See MoreSee Less