The University of Arizona Philharmonic Orchestra will present a concert on Friday, February 23, 2018 at 7:30 p.m. in Crowder Hall. Conducted by doctoral student Juan Montoya, the orchestra will perform Engelbert Humperdinck’s Prelude to “Hansel and Gretel” and Symphony No. 1 in C Major, Op. 21 by Ludwig van Beethoven.

The University of Arizona Philharmonic Orchestra is one of the large ensembles vital to the educational and artistic mission of the University of Arizona Fred Fox School of Music. In its ranks are music majors and minors, as well as many students and other members of the UA community. The Philharmonic performs a cross-section of the orchestral repertoire in a number of concerts each year. The ensemble performs under the baton of doctoral students András Derecskei and Juan Montoya, under the direction of Director of Orchestral Activities, Dr. Thomas Cockrell. This program will be conducted by Juan Montoya.

Montoya earned a bachelor’s degree in piano performance from the EAFIT University, in Medellín, Colombia and a double master’s degree in piano performance and orchestral conducting from the University of Toledo, Ohio. He is currently pursuing a Doctor of Musical Arts degree in orchestral and opera conducting at the University of Arizona as a student of Dr. Thomas Cockrell. He also works under the tutelage of Vance George of the San Francisco Symphony Orchestra.

Montoya’s most recent opera engagements have included productions of La bohème (2016), La Fille du régiment (2017), and The Marriage of Figaro (2017) with the Kuala Lumpur City Opera (Malaysia), which he has served as resident conductor since 2014. Future engagements include Humperdinck’s Hansel and Gretel in Malaysia and guest conducting concerts and operas in Cairo, Paraguay, Hungary, Romania, Colombia and the United States. 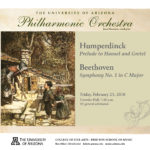 music.arizona.edu/alumni
....
Oscar Macchioni, a native of Argentina, is an accomplished solo and collaborative pianist, professor, lecturer, author, and adjudicator. Oscar has performed extensively in his native Argentina, Italy, England, Poland, Serbia, Turkey, Mexico, Thailand, China, and the USA, at notable locations such as Weill Recital Hall at Carnegie Hall, Teacher's College at Columbia University, Steinway Hall, St Martin in the Fields and James's Piccadilly in London, the Querceto International Piano Festival in Italy, and the National Conservatory in Bueno Aires in Argentina. He studied piano at the Universidad Nacional de Tucumán (Argentina), the Krakow Academy of Music (Poland), Louisiana State University, and the University of Arizona (USA – DMA Piano). He is a Professor of Piano, Assistant Chair and Keyboard Area Coordinator at the University of Texas at El Paso.
....
Follow us on social media:
Instagram
Twitter
Facebook
YouTube
#WildcatForLife #WildcatStrong #FredFoxSchoolOfMusic #uazmusic #uazmusicalumni
... See MoreSee Less

"The Illusion of Separateness for bassoon and string orchestra was commissioned in 2019 by the Keene Chamber Orchestra and a consortium of 20 bassoonists. The piece is about interdependence and the idea that everything and everyone is and must connect—our own habitat depends on it. The music itself explores separateness and connectedness between soloist and collaborating ensemble, in this case piano. You’ll hear sections of the melody move between the instruments; the solo and accompaniment oftentimes switch roles; in a passage of quiet chords, the solo bassoon becomes part of the texture. The different sections and moods form a colorful and hopeful journey."

Calling our music alumni! The Fred Fox School of Music wants to celebrate your achievements with you! Tell us more about you at the link below.