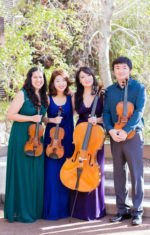 The University of Arizona Fred Fox School of Music presents the UA Graduate String Quartet in concert. The free-admission performance will be held on Sunday, April 1, 2018 at 7:00 p.m. in Holsclaw Hall.

The University of Arizona Graduate String Quartet is made up of master’s and doctoral students selected from a national search. The ensemble contributes to the Fred Fox School of Music outreach and educational initiatives.
Members of this year’s quartet are violinists Stella Kim (New Zealand) and Laura Cásarez (Texas), violist Tiezheng Shen (China), and cellist Diana Chiknaikin (Australia).

Stella Kim is a second-year doctoral student in violin performance at the University of Arizona Fred Fox School of music studying with Professor Timothy Kantor. She earned a Master of Music degree with first class honors in violin performance with Elizabeth Holowell at the University of Auckland (New Zealand). As a winner of the University of Arizona Concerto Competition in 2016, she performed with the Arizona Symphony Orchestra (Tchaikovsky Violin Concerto). She is an internationally active solo violinist and chamber musician. In 2015, her Trinity Trio was one of the finalists in the Brahms International Competition in Austria. She was invited to France by The Fine Arts Quartet, where she performed in the Pablo Casals Festival. She was the winner of Pettman/Royal Overseas League Chamber Music Scholarship with Trinity Trio. This substantial scholarship allowed the trio to go on a two-month tour of UK, giving more than fifteen recitals, and taking lessons from teachers from Trinity Guildhall, Royal Academy and Royal College in London. Some of the highlights of their performances included in the Edinburgh International Festival in Scotland, the Lake District International Summer Music Festival and St. James’s Church, Piccadilly in London. Ms. Kim is currently a member of the University of Arizona Graduate String Quartet.

Laura Cásarez, violin, is pursuing a Master of Music degree at the University of Arizona Fred Fox School of Music studying with Professor Timothy Kantor. Laura recently completed her Bachelor of Music degree at Rice University’s Shepherd School of Music as a student of Ken Goldsmith, graduating with distinction in research and creative work. She has performed in master classes for violinists Arnold Steinhardt, Jeanne Lamon, Rachel Barton Pine, Regis Pasquier and Laurie Smukler, as well as the Shanghai, Jerusalem, Dover, Arianna, and Jupiter quartets. As an orchestral musician, Laura had the privilege of performing at Carnegie Hall as a member of the Shepherd School Symphony Tour Orchestra in the fall of 2016. She has attended numerous orchestral and chamber music programs, including Madeline Island Chamber Music, Domaine-Forget International Music Academy (Canada), Brevard Music Center, Bowdoin International Music Festival and the Music Academy International Chamber Music Festival (Italy). She is currently a member of the University of Arizona Graduate String Quartet.

Award-winning violist Tiezheng Shen recently made his solo debuts at Carnegie Hall and Wiener Saal Mozarteum in Salzburg. He premiered the Viola Concerto by Alfred Schnittke in Arizona with the Arizona Symphony Orchestra after winning the University of Arizona Concerto Competition in 2014. As a chamber musician, Mr. Shen has received professional training with world leading chamber groups, including Ying Quartet, St. Lawrence Quartet, American Quartet, and Shanghai Quartet. Also, he has collaborated with leading musicians. Mr. Shen has served as principal violist for many professional orchestras. He is currently a member of the University of Arizona Graduate String Quartet. Mr. Shen is pursuing a Doctor of Musical Arts degree in viola performance studying with Professor Hong-Mei Xiao at the University of Arizona, where has been the recipient of several scholarships and academic recognitions. His new CD, “Works for Viola and Guitar by Austrian Romantic Composers” will be released this year.

Diana Yusupov graduated from Queensland Conservatorium of Music in 2009 with a Bachelor of Music degree in advanced performance. While at the conservatorium she studied cello with renowned cellist and teacher Markus Stocker. She has won a number of competitions including Piatti Competition, Sonata Prize, Bach Competition and was honored with academic excellence awards every year during her undergraduate studies. Diana participated in master classes with Peter Burns, Steven Isserlis and Jian Wang. In 2008 she won a concerto competition, gaining an opportunity to perform solo with the Conservatorium orchestra. Diana earned a Graduate Diploma in education in 2010 and has since been teaching music to high school students in classroom, instrumental and ensemble settings. In 2016 Diana was accepted into the studio of Dr. Theodore Buchholz to complete her Master of Music degree in cello performance at the University of Arizona Fred Fox School of Music. She is a member of the University of Arizona Graduate String Quartet. 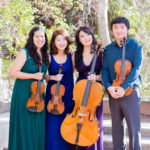