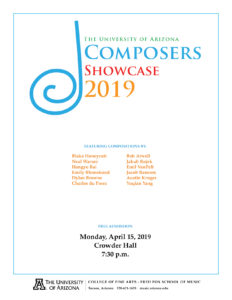 The University of Arizona Composers Showcase “A Night of Premieres”
Monday, April 15, 2019 in Crowder Hall, 7:30 p.m.

My Song is Love Beguiled; Loosely based on a well-known hymn, My Song is Love Unknown, written by John Ireland with the original text by Samuel Crossman, attempts to musically capture a frustration of a misdirected feelings, or an affection for a beguiling individual. All that is to be achieved by the use of melodic fragmentation, stratification, polytonality, microtones, live sound processing, and finally the whole group joyfully singing together.

Some say the world will end in fire, some say in ice.

From what I’ve tasted of desire I hold with those who favor fire.  But if it had to perish twice, I think I know enough of hate to say that for Destruction ice is also great and would suffice.

Clarinet Sonata No. 1; A fairly traditional and generally tonal sonata in 3 movements for clarinet and piano dedicated to three of my clarinet teachers: Jeremy Reynolds, Michael Byerly, and Sara Canning.

East… West; Inspired by the beautiful scenery of Japanese Garden and Old Tucson. The East and West architectures could perfectly stayed in the same city, just like my life experience, like many international students’ experience, which combined with East and West culture. But the connection that supports us here is love, from the family, friends, teachers, and maybe a stranger who once helped you. Bring the love between us no matter where we from, who we are, no matter East or West.

Broken Glass; Inspired by a dream of descending through an abandoned hotel lobby, with no other way to travel but down. Throughout the presentation, the everyday objects and sightings will become strange and twisted to replicate both a dreamlike atmosphere and the distortion that we may perceive when facing negative experiences. “Broken Glass” explores the journey we all make as we face and resolve the darker parts of our thoughts.

Mănăstirea din Munții (monastery from the mountains); A programatic piece inspired by my travels in Romania. The music depicts the ascent through the winding, fog-bathed Carpathians and the arrival at an ancient Monastery. The Monastery itself was stone and illuminated only by twinkling candlelight. Finally, the music depicts the descent down the mountains with a slightly new perspective.

helloworld; An aesthetic exploration using sound as a medium. Thematically, the piece conceptualizes aesthetic aspects of technology and computers through use of synthesizers, abstract samples, vocoder, and distortion. As a multimedia piece, the video aspect complements sound through distorted, computer generated visuals and some glitch techniques.

Two Studies; Contrast pseudo-improvisational sounds from the flute and clarinet, combined with video projection from nature. The first study utilizes video footage from Rocky Mountain National Park; the second harnesses a feline type of feel. The flute and clarinet will be hear­d making various sounds, along with a pre-recorded track, making for an auditory experience that blurs the distinction between each sound source.

Behind My Grandmother’s House; Encapsulates the scene of a young child being lost in the woods. While being lost, he finds a shrine and gazes over all of its features, before communing with it. The textures and “breaths’ between the instruments elude to a peaceful, yet contemplative and reverent nature.

Last Night on Mars; Inspired by the desolate and beautiful Sonoran desert landscape. The space and silence of the land envelop one’s thoughts and help create a dialogue between the earth and sound. The piece begins with rhythmically shifting and percussively struck chords, like the growth pattern of cholla cactus, zigzagging, growing and folding. As focus pans backwards, an echoing ripple of analogue synthesizer ebbs and flows creating a counter rhythm to first pattern. Out of the intersection, a meandering and subtle melody emerges. The melodic content carves through the harmonic structure in a similar way that the arroyos and washes cut through the rugged terrain. The second section of the piece evolves into a more static and rhythmic pulsing contrapuntal melodic line. The rain begins to fall creating dust, mud, and suddenly, giant waterways form where once dry river beds, seemingly lifeless, now rush with mineral stained flushes of rapidly moving water. The final section of the piece illustrates this effect with similar melodic content as the first section, but with more dramatic intensity and with added harmony, percussive textures, and rhythmically complicated bass parts.