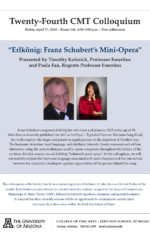 This colloquium is the twenty-fourth in a continuing series of lectures, to take place on the last Friday of the month. Each features a presentation by a faculty member, student, or guest in the areas of Composition, Musicology, or Music Theory (CMT), followed by a time for questions, comments, and general discussion. It is hoped that these monthly sessions will be an opportunity to communicate current ideas and research in these areas within the Fred Fox School of Music.

Franz Schubert composed “Erlkönig” for solo voice and piano in 1815 at the age of 18. After three revisions, he published it in 1821 as his Opus 1. Typical of German Romantic Song (Lied) the work employs the singer and pianist as equal partners in the depiction of Goethe’s text. The harmonic structure, tonal language, and rhythmic intensity clearly represent each of four characters, using the same techniques used by opera composers throughout the history of the art form. For this reason, we call Erlkönig, “Schubert’s mini-opera.”

The four characters in the song — narrator, father, son, and the Erlkönig — are all sung by a single vocalist. Each character is sung using a different vocal range and timbre. In addition, each character has his own tonal and harmonic “Leitmotifs.”

1    The Narrator sings in his middle range and introduces and closes the story in G minor. Why are there characteristically Baroque elements present in the notation of his melodies?

2    The Father sings generally in his lower range and seems intent on explaining away the dangers his son encounters. Are his cadences any more convincing than his explanations?

3    The Son’s reactions lie in a higher range and center around one chord. What makes his signature chord so unstable?

At the colloquium, we will interactively explore the harmonic language associated with each character and the interaction between the characters, leading to a greater appreciation of the genius behind this mini-opera. The presentation will conclude with a complete performance of Erlkönig.

Dr. Kolosick’s thirty-year academic career combined theoretical studies with practical, creative applications in technology and conducting. He has been a specialist in applications of high technology to music analysis, performance, and instruction. Author of numerous articles, books, award-winning music computer software, he is also a recipient of the Five-star Teaching Award at the University of Arizona. In 1988 a Fulbright Professor Exchange took him to London to teach music theory, composition, technology, and conducting at Goldsmiths’ College, University of London.

Dr. Kolosick is a former director of the Peter Treistman Fine Arts Center for New Media, a high-tech research arm of the College of Fine Arts. In conjunction with that center he received a grant in 1992 to found and conduct Orchestra Nova, a live keyboard orchestra. He also conducted the Yamaha-sponsored Clavinova Festival during its five-year existence and completed fourteen years as conductor of the TMTA Piano Ensemble Concert with circa 500 young participants. His past conducting positions include Assistant Conductor at the Vienna Conservatory, a member of the conducting staff of the Wisconsin Youth Symphony Orchestras, numerous church choirs, and most recently six years as Worship Pastor at El Camino Baptist Church.

Pianist Paula Fan has performed on five continents, recorded twenty commercial albums, and has broadcast for the BBC, NPR, Radio Television China, and international stations from Bosnia to Australia. As one of the first recipients of the doctorate in Collaborative Piano, she has lectured on the subject worldwide. She performed and taught at the UA’s Fred Fox School of Music for forty years, has played with the Tucson Symphony for thirty-one, and has also served as Visiting Professor at the Eastman School of Music. As both performer and teacher, one of her greatest interests has been building bridges between classical music and audiences of all ages and backgrounds, as well as between disciplines.

As the only Regents’ Professor from the Fine Arts, Dr. Fan was part of the team that founded the UA’s Confluencenter for Creative Inquiry, which not only brings together traditionally complementary disciplines within the humanities and fine arts, but also, recognizing that creativity exists within a context, is unique in its inclusion of the social and behavioral sciences and beyond. With Confluencenter’s encouragement, Dr. Fan’s Creative Collaborations series married disciplines from Hospice Care to Cookery with so-called “serious” music, based on her belief that classical music belongs to everyone. She is Confluencenter’s first Senior Fellow (from 2014 to the present), and continues to perform throughout the world.

Throughout her academic career, Dr. Fan has explored the world of classical music in different ways with her series of “Time Traveler’s Concerts” in which musicians from history speak as well as perform, “Accompanist’s Lib” concerts highlighting the role of the underappreciated assisting pianist, and in collaboration with other entities, most notably the Arizona Research Institute for Solar Energy (AzRISE). She was a founder of the Solar Storytellers — a piano trio playing electric instruments powered by a golf cart with a solar panel for a roof — and with her brother Michael, produced the Dr. Solara Trilogy of children’s solar energy shows performed on the National Mall in Washington, DC, at the Aspen Science Center, and in Tucson.