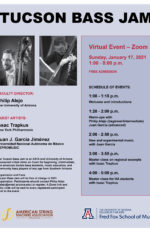 Tucson Bass Jam will be free of charge in 2021.

García studied double bass at the University of Houston under the tutelage of Dennis Whittaker and earned a master’s degree at Arizona State University under Catalin Rotaru in 2008. Since then he has fully devoted himself to teaching, performing, and disseminating new music, premiering hundreds of works by composers from around the world with the CEPROMUSIC Ensemble, Liminar Ensemble, and the Low Frequency Trio. Important performances include concerts at the Huddersfield Contemporary Music Festival (UK), The Darmstadt Summer Festival (Germany), No Idea Festival (Austin), the Tate Modern (UK), and the Rothko Chapel (Houston).