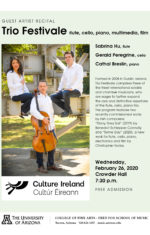 Formed in 2008 in Dublin, Ireland, Trio Festivale comprises three of the finest international soloists and chamber musicians, who are eager to further expand the rare and distinctive repertoire of the flute, cello, piano trio. They have toured regularly throughout Europe, America, and Asia, giving concert performances at many of the most prestigious venues in the world.

Trio Festivale has recently performed to great critical acclaim such as “an intense and delicate sound world….you could almost sense the audience silently emitting a collective “ahh”…then with high spirits and humour” – The Irish Times

Venues have included Carnegie Hall in New York, the National Concert Hall in Dublin, Boston Center for the Arts, Rice University in Houston, the American Irish Historical Society in New York, Peking University and Beijing Central Conservatory of Music in China, Hong Kong University of Science and Technology, the Korea Foundation in Seoul, and in many more prominent venues across the USA, Asia and Europe. They have broadcast for radio and T.V. many times for BBC in the U.K., RTE in Ireland, and RTHK in Hong Kong.

One of the most important objectives for Trio Festivale is music education. They regularly give master classes and workshops alongside their concerts, and they have created partnerships with Universities and Conservatories throughout the U.S., Europe and Asia. The Trio have frequently been Artists in Residence at the Walled City Music Festival in Derry, Northern Ireland since 2008.

Members of Trio Festivale are strong advocates of contemporary music and have commissioned and premiered works by composers Benoit Granier, Ed Bennett, Ian Wilson and many more. The trio believe passionately in the importance of new music, collaborating directly with composers, and the importance of further expanding the repertoire for their ensemble. In the 2018-2019 Season, Trio Festivale commissioned a work “The Great Hunger” by composer Ian Wilson. The work was inspired by the work of the great Irish poet, Patrick Kavanagh. Trio Festivale performed the work in eight cities on two continents in 2019. In the 2019/20 season, they commissioned a new Kavanaugh-inspired work by Benedict Schlepper-Connolly, and a work for the Trio, electronics and film by Christopher Norby, reflecting on the Civil Rights movement in Northern Ireland and worldwide in the 1960s. These works will be performed in multiple venues in the U.S., U.K., Ireland, and Asia in 2020.

*Commissioned by Trio Festivale with funds provided by the Arts Council of Ireland. Inspired by the poem Stony Grey Soil by Irish poet, Patrick Kavanaugh.

Miguel Del Aguila (b. 1957)
Seducción for flute, cello and piano (arranged for Trio Festivale in 2019)

*Commissioned by Trio Festivale with funds provided by the Arts Council of Northern Ireland.

This multimedia work reflects on the Civil Rights movement in Northern Ireland and worldwide in the 1960s.