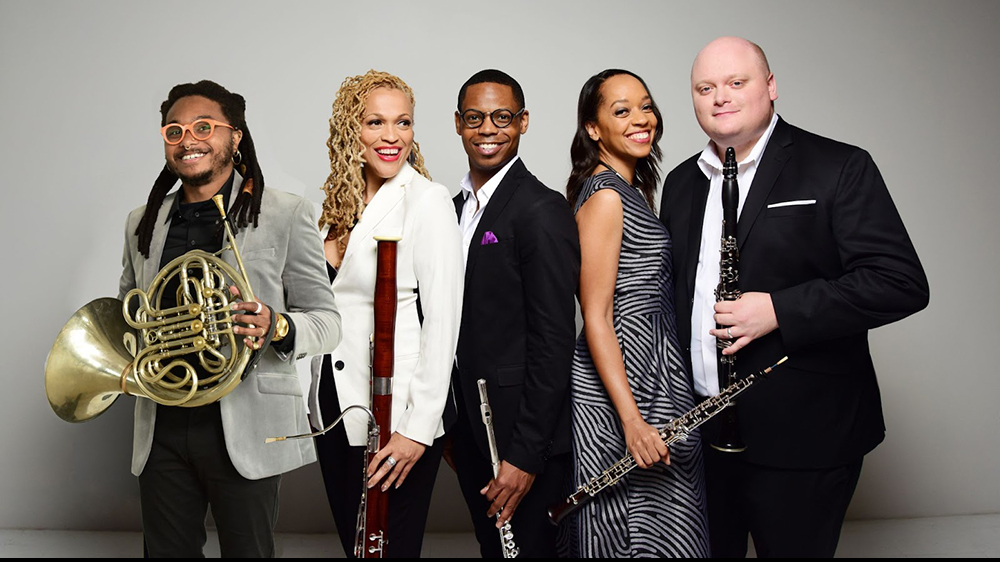 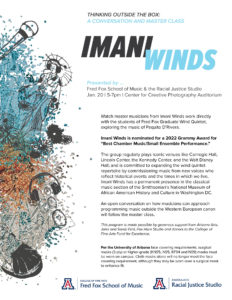 “Thinking Outside the Box – a Conversation and Masterclass with Imani Winds”
January 20, Thursday, 5:00 p.m.
Center for Creative Photography Auditorium
$Free

The Fred Fox School of Music and the Racial Justice Studio host the Grammy nominated wind quintet Imani Winds at the University of Arizona to present “Thinking Outside the Box – a Conversation and Masterclass with Imani Winds”.  Audiences are invited to observe the Imani Winds work directly with the Fred Fox Graduate Wind Quintet in exploring the music of Paquito D’Rivera. Immediately following will be an open conversation about curating a meaningful artistic career in the 21st century and how musicians can approach programming music outside the Western European canon.

Arizona Arts’s Racial Justice Studio seeks to amplify the work of Arizona Arts scholars, artists, and educators for whom anti-racism is a core tenet embedded in their professional and personal lives, while also partnering with stakeholders, advocates, and activists beyond the UA campus.

About the Artists
Celebrating over two decades of music making, Imani Winds is known for pushing the boundaries of chamber performance and the wind quintet repertoire. Their intentional programming incorporates imaginative collaborations and commissions from new voices that reflect historical events and the times in which we currently live. Their projects center around commissions by living composers, celebrating phenomenal women, music written or inspired by migrants and immigrants from the Latin and African diaspora. Imani Winds offers diverse artist perspectives in an educational and interactive way.

The Fred Fox Graduate Wind Quintet is one of the university’s premiere student chamber ensembles. Since the formation of the inaugural quintet in 2007, the cohorts of this ensemble have performed in China, Mexico and all throughout the southwest. The ensemble’s accolades include the MTNA, Coleman, and Plowman chamber music competitions. Its members have won solo competitions and several alumni hold positions in professional orchestras and ensembles. The current cohort includes first year master’s students.