The musical traditions of “The March King” John Philip Sousa, continue here in Tucson on Sunday, July 8.  The NATIONAL COMMUNITY BAND, a project of the John Philip Sousa Foundation, will present a free concert at 3:30pm in Crowder Hall on the campus of the University of Arizona.

According to Gerald Guilbeaux, the project administrator and conductor of the Lafayette (LA) Concert Band, the 90-member concert band is comprised of adult amateur musicians from around the country representing 25 states and 56 outstanding community bands. The NCB will be led by Colonel John R. Bourgeois, Director Emeritus of the United States Marine Band “The President’s Own” in Washington D.C. The band members will gather on the University Campus for rehearsals on Thursday, Friday and Saturday, with the concert slated for a 3:30pm start on Sunday. Guilbeaux commented, “the NCB performs in different parts of the country every summer, we’ve been to Boston, Chicago, New Orleans, Las Vegas and last year we were in Indianapolis. We were fortunate to bring the band here to Tucson this year.”

Col. Bourgeois was the 25th Director of “The President’s Own” United States Marine Band and his acclaimed career spanned nine presidential administrations, from Presidents Dwight D. Eisenhower to Bill Clinton. Bourgeois is a graduate of Loyola University in New Orleans. He joined the Marine Corps in 1956, entered “The President’s Own” as a French Horn player and arranger in 1958 and was named Director of the Marine Band in 1979; he was promoted to colonel in June 1983. Bourgeois retired from active duty July 11, 1996.

According to Col. Bourgeois, “the concert will have music for everyone, from orchestral transcriptions to a John Philip Sousa suite, “People Who Live In Glass Houses,”along with great continental marches and of course, Sousa Marches . You are guaranteed to be genuinely entertained. There will be no charge for admission, but arrive early for best seating.”

The John Philip Sousa Foundation is a non-profit foundation dedicated to the promotion of international understanding through the medium of band music. Through the administration of band related projects, the group seeks to uphold the standards and ideals of that icon of the American spirit, John Philip Sousa.

The public is invited admission free to this concert on Sunday, July 8 at 3:30pm. 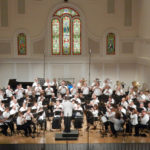