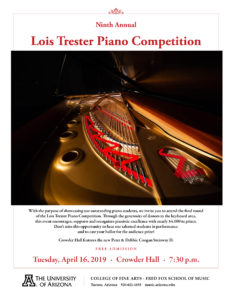 The finals of the Ninth Annual Lois Trester Piano Competition will take place on Tuesday, April 16, 2019 at 7:30 p.m. in Crowder Hall. The competition is free admission and open to the public.

With the purpose of showcasing our outstanding piano students, we invite you to attend the final round of the Lois Trester Piano Competition. Through the generosity of donors to the keyboard area, this event encourages, supports and recognizes pianistic excellence with nearly $4,000 in prizes. Don’t miss this opportunity to hear our talented students in performance and to cast your ballot for the audience prize! Crowder Hall features the new Peter & Debbie Coogan Steinway D.

Correction note: This competition was inaugurated in 2010. This is the ninth edition, and not the tenth, as previously advertised.

Lois Trester was a beloved Tucson piano teacher who passed away in 2007. William Wolfe funded this scholarship in her name as a way of remembering her immense contribution to TMTA (Tucson Music Teachers Association) and our local piano community. In addition, TMTA – in conjunction with the Community Foundation of Southern Arizona – has again contributed the second prize in honor of Winifred Knight.

Past winners of the Lois Trester Piano Competition: