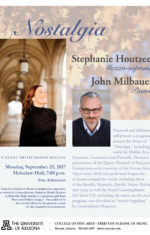 Houtzeel and Milbauer will present a program around the theme of “Nostalgia,” including works by Mahler, Ives, Ginastera, Guastavino and Piazzolla. Houtzeel, prizewinner of the Queen Elisabeth of Belgium Competition and a member of the Vienna State Opera since 2010, has performed frequently at houses around the world, including those of the Bastille, Bayreuth, Zürich, Tokyo, Berlin and Lyon, as well the Royal Concertgebouw. Her latest CD, including the music on this recital program, was described as “utterly beguiling” by Gramophone Magazine.

The Fred Fox School of Music is delighted to announce the arrival of a of a beautiful new
Steinway Model B piano in Holsclaw Hall, thanks to a generous gift from Peter and Debbie Coogan. The audience in this recital will enjoy the glorious sound of this magnificent instrument.

American mezzo-soprano Stephanie Houtzeel was born in Kassel, Germany and grew up near Boston. She studied political science and French at Middlebury College before obtaining her master’s degree at the Juilliard School. She won top honors at the International Queen Elisabeth of Belgium Competition and at the Juilliard Vocal Arts Debut Competition. She has been a member of the Vienna State Opera ensemble since 2010 where she has sung a wide variety of leading roles including Octavian, der Komponist, Dorabella, Orlofsky, Nicklausse, Kreusa (in Reimann’s “Medea”) and Jenny Hill in “Mahagonny.” In 2015 she created the role of Miranda in the Vienna world premiere of Thomas Ades’ “The Tempest” and in 2016 the role of La Haine in Vienna’s first production of Gluck’s “Armide” conducted by Marc Minkowski.

Stephanie Houtzeel’s performances in the Strauss repertoire have been heralded around the world. Her most recent appearances as Octavian were opposite Anja Harteros in Vienna, at the Opéra Bastille under Philippe Jordan and at the Kennedy Center with Renée Fleming and Christoph Eschenbach. Nominated one of the best up-and-coming singers by “Opernwelt” magazine for her “Komponist,” she has gone on to sing this role under both Sir Jeffrey Tate and Franz Welser-Möst (Vienna), in Zürich under Fabio Luisi and most recently in Tokyo under Marek Janowski. A personal highlight of the past two seasons has been the title role in Stefan Herheim’s acclaimed production of “Xerxes,” both at the Komische Oper Berlin and at the Oper Graz, which earned Stephanie a nomination for the Austrian Music and Theatre Prize. Further engagements, in roles ranging from Ottavia to Marguerite, Arsace to Charlotte or Idamante to Meg Page, have taken her to such international stages as the Salzburger Festspiele, the Semperoper Dresden, New York City Opera, Opéra de Lyon, the Royal Danish Opera, Theater an der Wien, Opéra National du Rhin, the New Israeli Opera, Teatro Nacional de São Carlos Lisbon and the Vlaamse Opera.

Stephanie Houtzeel debuted at the Bayreuther Festspiele in 2016, singing Wellgunde, Waltraute (Walküre) and Second Norn in Wagner’s Ring. She will reprise these roles at the Festival in 2017 as well as sing Venus in a new Bayreuth production of “Tannhäuser” for children. Along with Komponist and La Haine, current and upcoming roles include Kreusa (Medea), Adelaide, Varvara in Katja Kabanova and Vera in the world premiere of “Patchwork,” a children’s opera commissioned by the Vienna State Opera to be released on DVD. She will also return to the Komische Oper Berlin. Stephanie Houtzeel has appeared in concert around the world with the Vienna Philharmonic, the Royal Concertgebouw Orchestra, the Orchestre de la Monnaie, the Bruckner Orchestera, the Norddeutsche Rundfunk Orchestra, Collegium Vocale Gent, Musicians from Marlboro and Great Performers of Lincoln Center. She has collaborated with conductors including Valery Gergiev, Adam Fischer, Dennis Russell Davies, Philippe Jordan, Pinchas Steinberg, Phillippe Herreweghe, Teodor Currentzis, Jérémie Rohrer and Michael Hofstetter. Ms. Houtzeel is a regular recording artist. Her 2016 album, “Nostalgia” (on the Capriccio label), features songs of Mahler, Ives and Ginastera with pianist Charles Spencer and was highlighted by “Gramophone Magazine” as “beautifully judged” and “utterly beguiling.” She has recorded the title role in Lully’s “Armide” for Naxos and the title role in von Suppé’s “Fatinitza” (CPO). She also appears as the alto soloist in Mozart’s Requiem under Teodor Currentzis (Alpha Records).

Steinway Artist John Milbauer has recently performed in Brazil, Colombia, Costa Rica, Mexico, Spain, Switzerland, and Japan as well as throughout the United States. Highlights of 2017 include Ravel’s Concerto in G with the Boston Pops and Keith Lockhart in Boston’s Symphony Hall, Poulenc’s “Aubade” with San Diego Winds, recitals with Stephanie Houtzeel of the Vienna State Opera, and residencies with the Conservatorios Nacionales Superiores of Sevilla and Jaén in Spain. Current projects include a recording of the music of Manuel Ponce and performances of Milbauer’s “Which Side Are You On?” program based on themes of protest, immigration, and workers’ rights. France’s “Republique du Centre” has called him “a virtuoso of the first magnitude” while “American Record Guide” wrote, “Milbauer employs a full expressive range, performs with astounding delicacy, and conveys unspeakable wonder through an intimate touch and astonishing versatility.” A laureate of the Orléans Concours in France for piano music of the 20th century, he has performed concerts devoted only to chance music and enjoys playing music that employs electronic sounds, prepared piano, extended techniques, and graphic notation; in a similar vein, he has contributed a chapter on the performance of the music of John Cage to “The Pianist’s Craft” series. A versatile musician, Milbauer has performed with the Mills Brothers and Pink Martini, and has a discography that includes a release with violinist David Garrett that has over 250,000 views on YouTube.

Milbauer studied music, classics, and government at Harvard College before earning degrees from the Eastman School of Music, The Juilliard School, Manhattan School of Music, and, as recipient of a Fulbright grant, the Liszt Academy in Budapest. He was awarded the Eastman Performer’s Certificate (the highest performance honor of the school) and the Wolodarsky Prize from the Banff Centre, and was nominated for the Gina Bachauer prize for outstanding pianist at Juilliard. His teachers include Jerome Lowenthal, Ferenc Rados, György Sebök and Rebecca Penneys. Since 2012 he has been co-director of the Chautauqua Piano Program, helping to transform it into one of the premier summer piano programs in the Americas.