The Fred Fox School of Music at the University of Arizona presents “Steinway Piano Gala” featuring Van Cliburn-Competition gold medalist Jon Nakamatsu to celebrate the new Peter & Debbie Coogan Steinway D in Crowder Hall. In addition to a solo recital, the celebrated pianist will offer a master class and an all-school convocation in Crowder Hall.

A master class featuring Fred Fox School of Music piano performance majors on Monday, October 29 from 1:00 p.m. to 3:00 p.m. in Crowder Hall is free admission and open to the public.

During the All-School Convocation in Crowder Hall on Wednesday, October 31, Mr. Nakamatsu will share stories about his experience, as he is interviewed by Fred Fox School of Music faculty member and Steinway Artist John Milbauer, followed by a Q&A session. The public is also invited to this event.

This series of events featuring Jon Nakamatsu celebrates the culmination of a piano campaign initiated by the Fred Fox School of Music Advisory Board to raise funds for two new Steinway concert grand pianos for both of our performance halls. Thanks to generous donors Peter and Debbie Coogan, we now have two beautiful new Steinway pianos in our building. This performance will feature the Peter & Debbie Coogan Steinway D.

The distinguished American pianist Jon Nakamatsu – known internationally for the panache and elegance of his solo, concerto, and chamber performances – has become a favorite with audiences throughout the world. As a prolific recording artist, Mr. Nakamatsu has set to disc numerous seminal performances on the Harmonia Mundi label. In his review of Mr. Nakamatsu’s recent performance of Saint-Saëns’ Piano Concerto No. 2, Daniel J. Kushner writes in “The Rochester Democrat and Chronicle”: “Nakamatsu evinced brilliant musicianship. His tone and articulation sparkled and shimmered, while his use of dynamics and energy brought out the lifeblood of each and every phrase.” (May 1, 2015)

In the 2016-17 season, Mr. Nakamatsu joined the Rochester Philharmonic for Gershwin’s “Rhapsody in Blue” and Concerto in F, the Pensacola Symphony Orchestra for Beethoven’s Piano Concerto No. 4, as well as the Gulf Coast Symphony Orchestra and the Helena Symphony. He also performed in solo recitals across the country: in New Jersey, Pensacola, Florida, Waco, Texas, as well as several towns throughout the state of California. In May of 2017, Mr. Nakamatsu traveled to Japan for several performances in Okinawa and Miyako Island. In the 2016-17 summer season, Mr. Nakamatsu’s appearances included the Colorado Music Festival, the Chautauqua Music Festival, the Aloha International Piano Festival, and the Cape Cod Chamber Music Festival, where he is co-artistic director, together with his longtime artistic partner, clarinetist Jon Manasse.

Mr. Nakamatsu has been an active guest soloist with leading orchestras throughout his career; among them the orchestras of Dallas, Detroit, Indianapolis, Los Angeles, Rochester, San Francisco, Seattle, Vancouver, Berlin, Milan, and Tokyo. He has collaborated with such esteemed conductors as James Conlon, Philippe Entremont, Marek Janowski, Raymond Leppard, Gerard Schwarz, Stanislaw Skrowaczewski, Michael Tilson Thomas and Osmo Vänskä. His numerous summer engagements have included appearances at the Aspen, Tanglewood, Ravinia, Caramoor, Vail, Wolftrap, and Britt festivals. In 1999, Mr. Nakamatsu performed at the White House at the special invitation of President and Mrs. Clinton.

Among the many chamber ensembles with which Mr. Nakamatsu has collaborated are the Brentano, Jupiter, Miami, Tokyo, Prazak, St. Lawrence, and Ying String Quartets. He also tours frequently with the Berlin Philharmonic Wind Quintet and in 2008 debuted on the Philharmonic’s chamber music series performing with the Quintet and members of the orchestra. In 2008, the Manasse/Nakamatsu Duo released its first CD (Brahms Sonatas for Clarinet and Piano) which received the highest praise from “The New York Times” classical music editor James R. Oestreich, who named it a “Best of the Year” choice for 2008. In addition to their joint concert performances, Mr. Nakamatsu and Mr. Manasse serve as Artistic Directors of the esteemed Cape Cod Chamber Music Festival, founded by pianist Samuel Sanders in 1979.

Mr. Nakamatsu records exclusively for harmonia mundi USA, and has released twelve CDs to date. All have garnered high critical praise. Notable releases include Mr. Nakamatsu’s first collaboration with Jon Manasse with Brahms’ Op. 120 Sonatas, an all-Gershwin recording with Jeff Tyzik and the Rochester Philharmonic featuring Gershwin’s “Rhapsody in Blue” and Concerto in F which rose to number three on Billboard’s classical music charts, and a recently released trio disc of works by Brahms, Beethoven, and Weber with Mr. Manasse and cellist Clive Greensmith, which has elicited brilliant reviews from “The New York Times” (“Mr. Nakamatsu’s fleet-fingered clarity enhancing the vivacious outer movements and all three playing with deep expression in the Adagio”), “Gramophone” (“a most enjoyable disc, beautifully played and recorded, with the three players joining together to make a perfect ensemble”), and “Audiophile Edition” (“Every once in a while a disc comes along so good that I would award it six stars if my editor allowed such things”).

A high school teacher of German with no formal conservatory training, Jon Nakamatsu’s electrifying performance of Rachmaninoff’s Third Piano Concerto won him the Gold Medal at the 1997 Van Cliburn International Piano Competition amidst a field of experienced competition warriors. Mr. Nakamatsu had studied privately with the late Marina Derryberry from the age of six, and worked with Karl Ulrich Schnabel, son of the great pianist Artur Schnabel. He also studied composition and orchestration with Dr. Leonard Stein of the Schoenberg Institute at the University of Southern California, and pursued extensive studies in chamber music and musicology. Mr. Nakamatsu is a graduate of Stanford University with a bachelor’s degree in German Studies and a master’s degree in Education. 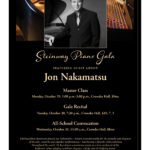