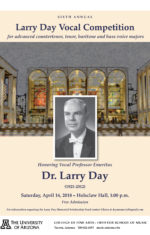 The University of Arizona Fred Fox School of Music Voice and Opera Theater presents the Sixth Annual Larry Day Memorial Vocal Competition. This free-admission
event will take place on Saturday, April 14, 2018 at 1:00 p.m. in Holsclaw Hall. The competition is open to countertenor, tenor, baritone and bass voice majors enrolled as a junior or above.

Judges will award generous cash prizes to the student winners. These awards are given in memory of Professor Emeritus Larry Day who taught voice and opera theater at the University of Arizona. Many students benefited from his expertise, passion, kindness and patience. His professional singing experiences include leading roles with Minneapolis, Denver and Arizona Opera, soloist with symphonies in Minneapolis, Rochester, Cedar Rapids, Sioux City, Denver, Billings, Ft. Collins, Tucson, Phoenix and Winfield, Kansas. Directing experiences include major oratorios with orchestras, operas and church choir. He was actively involved in many organizations including National Association of Teachers of Singing and National Opera Association (national president 1975-77).

Past winners of the Larry Day Vocal Competition: