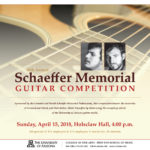 Sponsored by the Leonard and David Schaeffer Memorial Endowment, this competition honors the memories of Leonard and David, and their father, Albert Schaeffer, by showcasing the exemplary talents of the University of Arizona guitar studio.

Albert M. Schaeffer practiced law in Chicago and Tucson, and was a Chicago jazz pianist, a five-year combat captain in World War II, and a military judge in Germany following the war. His wife, Clare, was the daughter of Aaron Kritz, a famous Chicago cantor. She was raised in a distinguished musical family and appeared in Vaudeville as a young child.  She is a master therapeutic recreation specialist, and garnered national attention for her groundbreaking work in music therapy with the residents of Handmaker home for the aging. Clare’s brother, Robert Kritz, is a noted composer of classical music, her sister Brina Roden is a published poet, and her sister Judith Perkins was a an accomplished pianist. Their support and guidance helped to establish The University of Arizona Guitar Studies Program as one of this country’s finest.

The Leonard and David Schaeffer Memorial Endowment promotes and rewards excellence in guitar performance.  It is an endowed fund, the income of which provides awards for the winners of the annual competition and will continue to advance further objectives of the School of Music at The University of Arizona.

The University of Arizona, a major international center for study of the classical guitar, draws students from around the world, and past winners of the Leonard and David Schaeffer Memorial Guitar Competition have gone on to win top prizes in international guitar competitions as well.  Additionally, UA guitar students have garnered prestigious awards that include Fulbright scholarships, NEA and Rotary fellowships, and are well represented in numerous universities and conservatories in the USA and throughout the world.

For additional information about the UA Bolton Guitar Studies Program at the Fred Fox School of Music, contact Tom Patterson, professor of guitar, rtp@u.arizona.edu or 520-621-1157.