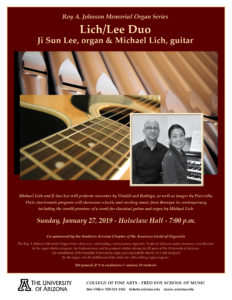 Michael Lich and Ji Sun Lee will perform concertos by Vivaldi and Rodrigo, as well as tangos by Piazzolla.  Their charismatic program will showcase eclectic and exciting music from Baroque to contemporary, including the world premiere of a work for classical guitar and organ by Michael Lich.

Ji Sun Lee, pianist/organist, was born in Seoul, Korea where she began her music studies at the early age of four. She is an exceptional international artist having performed concerts in Korea, United States, Brazil and Italy. She has won top prizes in several competitions including first prizes in the University of Arizona Concerto Competition, as well as the Contemporary Music Society Competition at Arizona State University. She was invited to perform as a guest artist in the New American Piano Series at Arizona State University, and also in several states in Brazil to perform and give master classes in 2002. There, she premiered William Bolcom’s the “New Twelve Etudes for the Piano” at the Villa Lobos Institute in Rio de Janeiro. Her musical tastes not only include classical repertoire, but jazz and world-ethno music as well. It is through her diverse understanding of music that she is able to bring an innovative and inspired performance to the concert stage. Her talent is not only limited to organ and piano. She has an extensive background as a choral conductor and church musician and has conducted choirs in Korea and the United States. She holds her bachelor’s degree in church music from Presbyterian College, Seoul, S. Korea, and a master’s degree from Arizona State University. In addition, she earned a Doctor of Musical Arts degree in piano performance and a Master of Music degree in organ performance from the University of Arizona. She has studied with Pamela Decker, and also piano with Nicholas Zumbro, a pupil of legendary Madam Rosina Lhevinne, Caio Pagano, Walter Cosand, and Yoon Hye Lee, and conducting with Donald Baily and Seung-Han Choi.

Classical guitarist, banjo-player and composer, Michael Lich is an eclectic musician who performs a wide variety of musical styles including classical, jazz and bluegrass.

Michael has performed throughout the United States, as well as Brazil, Mexico, Germany and South Korea. He has taught master classes and workshops at several prestigious institutions including the Escola de Musica do Espiritu Santo, Vitoria, Brazil; the New Mexico School for the Arts, Santa Fe, the Academy of Visual and Performing Arts, Culver City, California, and outreach programs for the Aspen Music Festival and School, Aspen and Basalt, Colorado. Michael is on the faculty at the Academy of Music and Dance of Tucson/Oro Valley and Pima Community College in Tucson, Arizona.

“Bach and the Mid-Century Modernists”

Pamela Decker, professor of organ and music theory at the Fred Fox School of Music, will present a program titled “Bach and the Mid-Century Modernists.” Music by J.S. Bach will be juxtaposed with works by composers born in the middle of the twentieth century, including Dan Locklair, A.F. Schultz and Pamela Decker. The program will spotlight the world premiere of “Ground Variations and Fugue” by A.F. Schultz, which was written for Pamela Decker. Violist Adrienne Cannon will join Dr. Decker in music for viola and harpsichord.