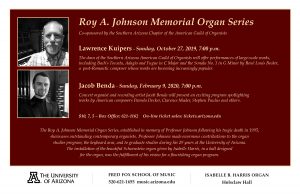 The dean of the Southern Arizona American Guild of Organists will offer performances of large-scale works, including Bach’s Toccata, Adagio and Fugue in C Major and the Sonata No. 1 in G Minor by René Louis Becker – a  post-Romantic composer whose works are becoming increasingly popular.