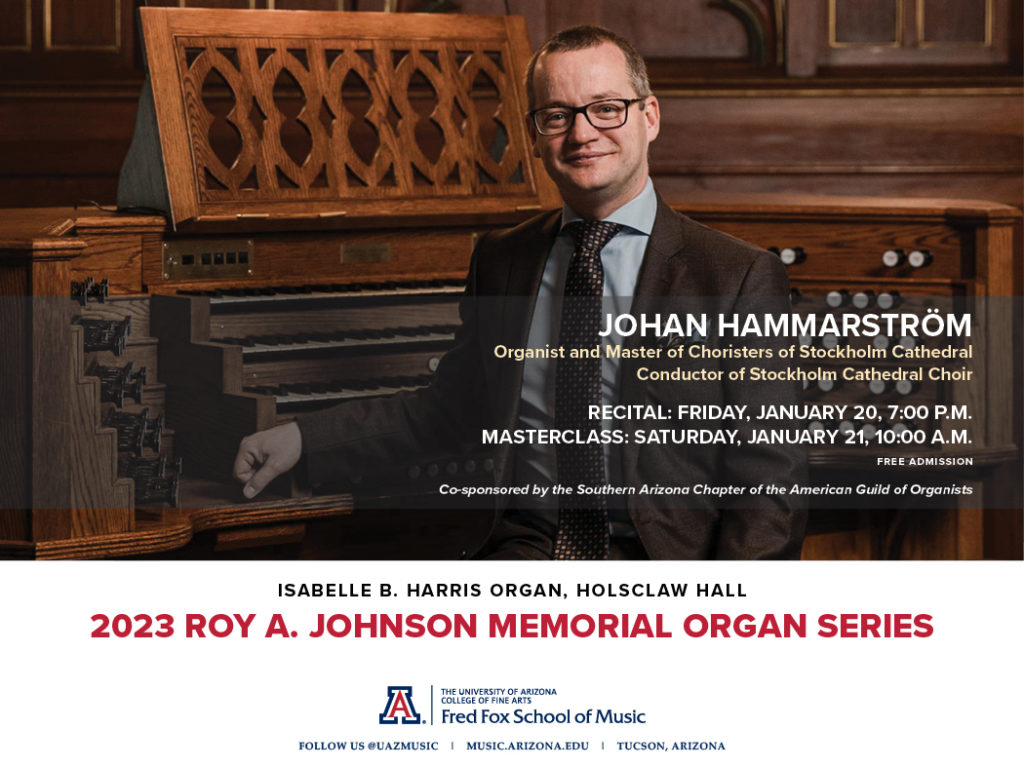 Roy Johnson’s granddaughter, Sophie Martinez, will be featured as a tribute to his legacy as the head of the organ program and the catalyst for the acquisition and design of the Schoenstein pipe organ in Holsclaw Hall.

The Roy A. Johnson Memorial Organ Series, established in memory of Professor Johnson following his tragic death in 1995, highlights outstanding contemporary organists. Professor Johnson made enormous contributions to the organ studies program, the keyboard area, and to graduate studies during his 29 years at the University of Arizona. The installation of the beautiful Schoenstein organ given by Isabelle Harris, in a hall designed for the organ, was the fulfillment of his vision for a flourishing organ program. 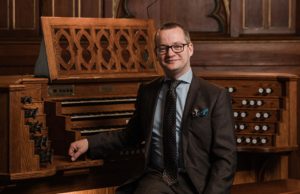 He was cathedral organist at the Västerås Cathedral for almost two decades where he further developed and expanded the cathedral’s rich musical life, while also teaching choral conducting at Örebro University. He is president of the annual Västerås Organ Festival, which he initiated in 2009. He oversaw the commissioning of new music, a project that Hammarström established in 2006, resulting in 35 commissions by both Swedish and international composers. He notably performed the Swedish premiere of Fred Fox School of Music Professor Pamela Decker’s major organ composition, ‘The Seven Last Words and Triumph of Christ,’ at the Stockholm Cathedral this past spring. Dr. Decker’s composition was commissioned by the American Guild of Organists for its 2018 convention, where she was the 2018 AGO Distinguished Composer.

Hammarström, who holds degrees in organ and church music from the Royal College of Music (Stockholm), is considered a formidable force in church music who combines brilliant musicianship as an organist and choir director with strong visions, perseverance, and foresight. Hammarström was appointed to his position at the Stockholm Cathedral in 2021.

Stardust (Dusty) Johnson’s granddaughter, Sophie Martinez, studied organ while an exchange student in Sweden this past Spring; it was through her that the connection to Dr. Hammarström was established.

Dr. Hammarström will conduct a master class Saturday, January 21, 10 am, where he will share his expertise as an artist and teacher, engaging both the students and the audience. The master class is open to student and Tucson organists. If interested in participating, please contact Professor Pamela Decker (pdecker@email.arizona.edu). 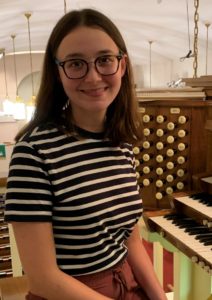 Sophie Martinez continued organ studies as an exchange student in Sweden during her junior year at Gustavus Adolphus College, which was named for a Swedish king. Roy Johnson’s connection with Swedish culture and influences will serve as a background for this tribute to his life and work. Having the current Director of Music and Organist at the Stockholm Cathedral, who is also a celebrated concert artist with a thriving international-level career, will be a landmark occasion for organ program that Roy Johnson developed and nurtured for three decades.