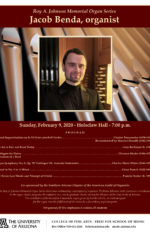 During the past four years Jacob Benda has had the privilege of performing organ dedication recitals and premiering new works written by award-winning composers. A highlight of 2018 was his performance of three statewide premieres (Minnesota, Mississippi, Louisiana) of Pamela Decker’s 40-minute monument for organ solo, The Seven Last Words and Triumph of Christ. He had the distinct honor of serving as understudy to Douglas Cleveland for the world premiere of this piece at the 2018 American Guild of Organists National Convention held in Kansas City. His collaboration with classical guitarists Tanja Mirić and Darka Kooienga, Duo Miriç, was met with great enthusiasm as they offered the world premiere performance of Partita on ‘In dulci jubilo’ for organ and two guitars by James Sclater. Most recently in 2019 he played the world-premiere of ‘The Air is Fair and Kind Today’ by Gary Bachlund, a Berlin-based composer, for the Los Angeles Chapter of the American Guild of Organists.

Since 2010 Jacob Benda has championed the music of prolific American organist and composer Clarence Mader (1904-1971). In 2017, he was invited by Yale University to lecture on the life and music of Clarence Mader, and in 2014 he lectured on the same topic at the American Guild of Organists National Convention held in Boston, MA. His landmark recording, Music at Midnight, A Tonal Palette, Organ Music by Clarence Mader, (Centaur Label, CRC 3361), was applauded by the American Record Guide as:

In addition to his demanding performance schedule Jacob Benda is a published author, producer and member of various executive boards. His recent article, Unveiling the Mystery: A Pianist’s Discovery of the Organ, was published in the September 2018 issue of the Music Teacher’s National Association (MTNA) e-journal and met with great enthusiasm as it offers direction to musicians seeking to explore the expansive world of organ playing. As a member of the Board of Directors of the Ruth and Clarence Mader Memorial Scholarship Fund, he is producing a documentary based on the unique life of Clarence Mader; this will offer an in-depth look into his music, visual art, poetry, and influence on American organists & organ music during the 20th century. As an active member of the American Guild of Organists he serves as the Sub-Dean for the Twin Cities Chapter, and was named coordinator for the 2021 American Guild of Organists North Central Regional Convention.

Dr. Benda has held posts as music director and organist at both Episcopal and Roman Catholic churches in the United States, and currently serves as Director of Sacred Music and Liturgy at the historic Our Lady of Lourdes Catholic Church in downtown Minneapolis, MN. In 2015 he earned his Doctor of Musical Arts degree (DMA) from Louisiana State University under the mentorship of concert organist Herndon Spillman, protégé of Maurice Duruflé.