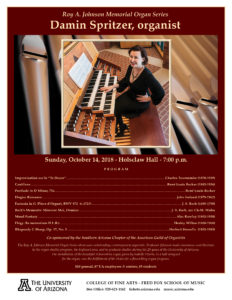 (Please note that Douglas Reed will not perform as previously advertised, due to unforeseen circumstances.)

Dr. Damin Spritzer is assistant professor of organ at the University of Oklahoma, and also serves the Cathedral Church of Saint Matthew in Dallas as artist-in-residence for the Cathedral Arts series. Her recent tours and performances have included recitals with the Terra Sancta Organ Festival in Israel, the La Verna Festival in Italy, recitals in Germany, Brazil, Norway, France, and at the 2018 National American Guild of Organists Convention in Kansas City. She has released five professional CD recordings for the commercial label Raven Recordings, the first three of which are world-premiere recordings of the organ music of René Louis Becker, recorded on historically significant organs in Pithiviers, France; Orléans, France; and Denver, Colorado. Becker’s organ music was the topic for her doctoral dissertation, and she has written a forthcoming monograph on his life and works and has published Volume I of a continuing multi-volume critical edition of Becker’s organ music with an extended preface. Her fourth disc for Raven was a collaborative project with trombonist Dr. Donald Pinson. Her fifth commercial organ CD for Raven was recorded earlier this year at Hereford Cathedral in England, where she was the first American and the first woman to make a solo organ recording on the historic Fr. Willis organ. The disc of English Romantic organ works has been released this month.

Her Doctor of Musical Arts degree was received from the University of North Texas, her MM in organ performance from the Eastman School of Music in Rochester, New York, and her BM in organ performance from the Oberlin Conservatory of Music. She serves on the board of directors for the Leupold Foundation, which is dedicated to the preservation of pipe organ music and culture, and on the programming committee for the Oklahoma City AGO chapter.

Please join us for the remaining two concerts of the 2018-2019 Roy A. Johnson Memorial Organ Series:

Michael Lich and Ji Sun Lee will perform concertos by Vivaldi and Rodrigo, as well as tangos by Piazzolla. Their charismatic program will showcase eclectic and exciting music from Baroque to contemporary, including world-premiere performances of works for organ and classical guitar by Pamela Decker and Michael Lich.

“Bach and the Mid-Century Modernists”

Pamela Decker, professor of organ and music theory at the Fred Fox School of Music, will present a program titled “Bach and the Mid-Century Modernists.” Music by J.S. Bach will be juxtaposed with works by composers born in the middle of the twentieth century, including Dan Locklair, A.F. Schultz and Pamela Decker. The program will spotlight the world premiere of “Ground Variations and Fugue” by A.F. Schultz, which was written for Pamela Decker. Violist Adrienne Cannon will join Dr. Decker in music for viola and harpsichord. 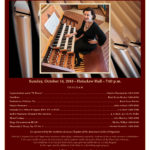