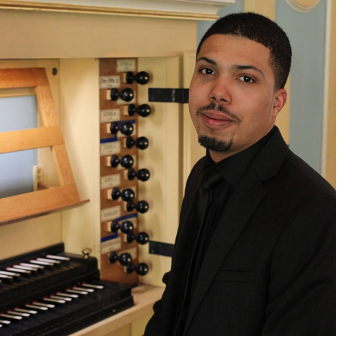 Recital
Friday, February 4, 2022
7:00 p.m. –
FREE ADMISSION
(Please contact the box office for a refund if you have already purchased a ticket)
Masterclass
Saturday, February 5, 2022
10:00 a.m. – $Free
The University of Arizona
Fred Fox School of Music
Isabelle B. Harris Organ
Holsclaw Hall
The Roy A. Johnson Memorial Organ Series, established in memory of Professor Johnson following his tragic death in 1995, showcases outstanding contemporary organists. Professor Johnson made enormous contributions to the organ studies program, the keyboard area, and to graduate studies during his 29 years at the University of Arizona. The installation of the beautiful Schoenstein organ given by Isabelle Harris, in a hall designed for the organ, was the fulfillment of his vision for a flourishing organ program.
Co-sponsored by the Southern Arizona Chapter of the American Guild of Organists

Winner of the 2017 Canadian International Organ Competition and Firmin Swinnen Silver Medalist at the 2016 Longwood Gardens International Organ Competition, Alcée Chriss III is widely regarded as one of the leading young organists of our time. He has been celebrated for his “grace, skill and abundant proficiency” by the Journal Assist News, Albuquerque. Of his prize-winning performance at the Longwood Gardens Competition, Choir and Organ Magazine declared, “Chriss stole the show.”

In July 2019, Chriss was appointed as University Organist and Artist-in-Residence at Wesleyan University, where he teaches courses in organ and applied music. In October 2019, Alcee was awarded his Doctor of Music degree from McGill University, where he studied with Hans-Ola Ericsson. He previously studied at Oberlin Conservatory of Music where he received his master’s degree in historical keyboard and a bachelor’s degree in Organ Performance. At Oberlin, he studied organ with James David Christie and Olivier Latry, improvisation with Marie-Louise Langlais, and harpsichord and continuo playing with Webb Wiggins and Hank Knox.

In addition to his organ and harpsichord performances, Alcee is also active as a church musician, conductor and jazz pianist. He currently serves as the Minister of Music at Saint Stephen’s Episcopal Church in Ridgefield, CT.