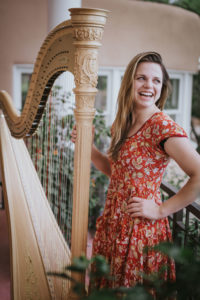 Principal harpist of the Rochester Philharmonic Orchestra and the Santa Fe Opera, Grace Browning, presents a virtual opera workshop for the harp studio. The public is invited to observe this virtual event, which will include a review of the students’ pre-recorded mock auditions, a brief synopsis of the selected operas, and a live masterclass on excerpts taken from Salomé, La bohème, Die Walküre, and Lucia di Lammermoor. If you would like to be included in this online event, please email Dr. Gott at gottharp@email.arizona.edu. The link will be emailed to participants on Tuesday, May 5th. We hope to “see” you there!

Praised for her “superb technical acumen and sensitive musicality” (South Florida Classical Review), Grace Browning has established herself as a leading ensemble harpist, avid soloist, and passionate advocate for community engagement. Equally at home in symphonic and operatic literature, Grace is the tenured Principal Harpist of both the Rochester Philharmonic Orchestra and the Santa Fe Opera, where she has spent the last two seasons and four summers, respectively. Her 2018-2019 season also included her debut with the Metropolitan Opera, performing Puccini’s Tosca, Bizet’s Carmen, and Wagner’s Siegfried as well as her solo debut with the RPO. Previously, Grace spent four years as tenured Principal Harpist of the Dallas Opera, as well as three seasons as Harp Fellow with the New World Symphony in Miami Beach. She received her masters degree from the Juilliard School in 2011, following two years at the University of Michigan (B.M.) and two years at the Eastman School of Music. In her spare time, Grace enjoys practicing yoga, volunteering for several arts organizations, and spoiling her sweet rescue dog, Annie. Follow her on Instagram @thegracefulharpist.

Recorded in the Jefferey Haskell Recording Studio in the Fred Fox School of Music building on 8/23/22. ... See MoreSee Less