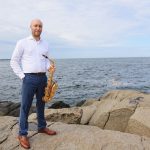 Described as impressive and expressive (Fanfare Magazine) and superb…[with] great dexterity, rhythm, and touch (American Record Guide), Hannah Creviston is clinical associate professor of piano pedagogy, director of the Music Prep Program and coordinator of Class Piano at Arizona State University. She received her bachelor’s in piano performance and music education with a piano pedagogy concentration from the Crane School of Music at SUNY Potsdam, studying with Eugenia Tsarov. A researcher and presenter on the effects of music on children with autism, she holds an master’s in piano performance and a master’s in early childhood/elementary music education from the University of South Carolina where she studied piano with Scott Price. Prior to joining ASU in 2012, Creviston was on the faculty at the Crane School of Music.

As a soloist, she won the Crane Annual Concerto Competition and was a finalist in the Arthur Fraser Piano Competition. An avid performer of contemporary music, Creviston has premiered many compositions, including works by Whitney Ashe, Cameron Britt, David Heinick, Katherine Hoover, John Fitz Rogers, Timothy Sullivan, Brian Vlasak and Mark Weiser. Most notably, in 2007, she premiered Stacy Garrops Pieces of Sanity at Carnegie Hall with saxophonist Christopher Creviston.

She performs regularly in a duo with her husband, Christopher Creviston. Together, they have recorded Snell Sessions and Columbia Sessions, both on the Albany Records label, and Sunday Afternoon and Breaking, available through CD Baby. Their recordings have been described as engrossing (Fanfare Magazine), highly imaginative and expressive (composer Denis B�dard), a good blend of the standard and the new (American Record Guide), and sensitive, transparent, powerful music making that causes one to hold their breath often (Donald Sinta).

Hailed for her “robust playing and virtuosic performance” (San Diego Tribune) and “beautiful and clear tone” (The Clarinet Magazine), Jackie Glazier is an active soloist, chamber musician, orchestral clarinetist, pedagogue, and advocate of new music. As assistant professor of clarinet at the University of Arizona Fred Fox School of Music, Glazier is a committed pedagogue and mentor to future generations of clarinetists, and a member of the Arizona Wind Quintet. As a soloist and chamber musician, she has performed throughout the United States and in China, Mexico, France, Belgium, the Netherlands, Luxembourg, Croatia, and Carnegie Hall’s Weill Recital Hall.

As a soloist and a founding member of the saxophone / clarinet ensemble Duo Entre-Nous, Glazier is active in commissioning and performing new music. She has commissioned and premiered over 20 pieces with composers from the United States, Canada, France, Italy, Argentina, China, and Australia. Duo Entre-Nous has performed internationally are featured on the album, “Lights and Shadows, Waves and Time,” which was recently released on Parma Records.

Glazier performed regularly with the Orlando Philharmonic as principal, second, and e-flat clarinet from 2011-2016. She also served as principal clarinet of the Ocala Symphony, where she served from 2012-2016. Currently she performs with the Tucson Symphony and is principal clarinet of the Grammy Award-nominated True Concord Voices Orchestra. Orchestral collaborations include many internationally renowned artists such as Renée Fleming, Joshua Bell, and Yefim Bronfman. Jackie was the first-prize winner of the International Clarinet Association Orchestral Competition at ClarinetFest 2014.

An active clinician and educator, Jackie has presented guest master classes at major universities throughout the United States. She has earned degrees from Cincinnati College-Conservatory of Music, University of Florida, and Florida State University. Her teachers include Deborah Bish, Ixi Chen, Mitchell Estrin, Jonathan Gunn, Richie Hawley, and Karl Leister. Jackie was named one of the University of Florida’s Outstanding Young Alumni in 2018. She is an artist with Buffet-Crampon and Vandoren, and performs exclusively on Buffet-Crampon clarinets and Vandoren reeds.

Born in Canada, Morris Palter’s diverse musical interests have found him performing throughout North America, Asia and Europe at some of the most prominent festivals and venues including Carnegie Hall, the Royal College of Music (London), the Quincena Festival (Spain), Disney Hall (Los Angeles) and IRCAM (Paris). Morris has commissioned and/or premiered hundreds of new compositions, working with both notable composers and new compositional voices.