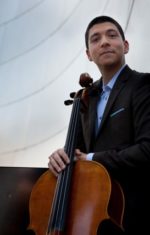 Event Description:
The Tucson Cello Congress is proud to present a guest artist recital featuring the outstanding young artist Nicholas Mariscal. A native of Tucson, Arizona, Nicholas Mariscal is an award-winning 25-year-old cellist performing diverse repertoire across the country. A specialist in Latin American composers, his success in national competitions led to a commercially-produced solo recording, Nubes Bajas: A Collection of Solo Cello Music from Latin America, as well as a solo recital at the Society of the Americas in New York City.

Mr. Marsical received his Master’s Degree from the University of Southern California with distinguished cellist Ralph Kirshbaum. after earning his Bachelor of Music degree at Indiana University under the tutelage of Eric Kim.