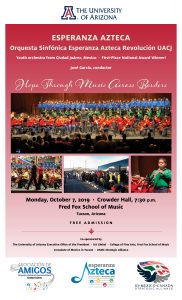 The University of Arizona presents Orquesta Sinfónica Esperanza Azteca Revolución UACJ, a youth orchestra from Ciudad Juárez, Mexico. The free-admission performance will take place in the Fred Fox School of Music’s Crowder Hall at 7:30 p.m. on Monday, October 7, 2019. This event is sponsored by the University of Arizona Executive Office of the President, the College of Fine Arts Fred Fox School of Music, UA Global, the Consulate of Mexico in Tucson and USMC Strategic Alliance.

In 2011, a great project to promote music in young generations started in the border city of Ciudad Juárez. The Esperanza Azteca Revolución UACJ Symphony Orchestra is an inspirational initiative that has hosted more than thousands of children and young adults from the state of Chihuahua since its foundation.

This orchestra is a social program for human and arts development, coordinated by the Azteca Foundation in Mexico. The project was developed with the main goal of creating orchestras across all of Mexico to attract vulnerable and underprivileged populations and introduce them to the world of music as a pathway for creating better opportunities. In total, Esperanza Azteca sponsors 62 symphony orchestras and choruses throughout Mexico, with over 17,000 children and young adults participating.

The youth orchestra in Ciudad Juárez motivates local and foreign populations to be engaged and attend their concerts, offering a diverse program from popular Mexican music to classical music pieces. Orchestra members can learn from a beginner level how to play an instrument, sing and perform in different scenarios. Esperanza Azteca also offers free concerts in low-income neighborhoods, creating safe spaces where families can enjoy music, and the symphony program can recruit local talent.

This orchestra has been recognized with an honorable first prize during a Mexican national competition with 83 orchestras representing different states from the south to the north of Mexico. The orchestra members have collaborated with renowned personalities such as Joshua Bell, Yo-Yo Ma, Plácido Domingo and others. In 2016, the group also performed as part of the hosting festivities to honor Pope Francis during his visit to Ciudad Juárez.

There is not a project comparable to Esperanza Azteca in all of Mexico, a program articulating exceptional efforts to recruit, train, and promote talented young musicians and singers from all of Mexico to the world.