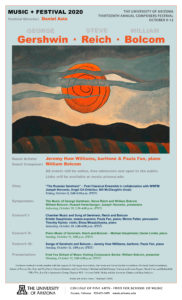 All events will be online, free admission and open to the public.
Links will be available at music.arizona.edu (one week prior to the events).

The concert will feature the Arizona Symphony Orchestra and student soloists who won the highly competitive University of Arizona Concerto Competition. Featuring clarinetist Gloria Ines Orozco Dorado, performing the “Black Dog Concerto” by Scott McAllister; pianist Wenxin Guan, performing movements II and III of the Piano Concerto No. 1 in G Minor, Op. 25 by Felix Mendelssohn; mezzo-soprano Martina Portychova, performing “Nobles Seigneurs, salut!” from Les Huguenots by Giacomo Meyerbeer; and violinist Emmy Tisdel, performing movement I of the Violin Concerto in D major, Opus 35 by Piotr Ilyich Tchaikovsky. The students are selected from each area of the Fred Fox School of Music – strings, voice, wind and percussion, and keyboard. They represent the depth of talent at the school, shining in this performance with the Arizona Symphony Orchestra. Graduate students Yudai Ueda and Fátima Corona del Toro will conduct the students’ performances. The program will also include works by Myroslav Skoryk and Alexander Borodin, under the baton of Dr. Thomas Cockrell.
***
About Martina Portychova

Born in Liberec, Czechoslovakia, Martina Portychova started her musical education when she was just five years old. She was enrolled at the elite Public Music Academy for piano, and auditioned for the prestigious Children's Choir, where she remained a member throughout high school. In 1995 Ms. Portychova moved from the rolling green pastures of the Czech Republic to the Arizona desert. She lived in Tucson where she attended University of Arizona and earned her Bachelor and master's degree in Voice Performance. When she was not performing, she would explore the desert on her Arabian horse Gypsy Gaim and compete in endurance races. She remained in the United States after her education was completed and moved to New York to seek her professional life. Recently she officially became a citizen here. This was an essential life goal, and her American identity is important in her life. Maintaining dual citizenship in both the Czech Republic and this country gives her a seamless advantage to working anywhere between the European Union and here in the United States. Having grown up in Eastern Europe, Ms. Portychova speaks several languages. Russian, Czech, German, French, Italian, and Latin are her most fluid. Her other personal interests include skiing, horseback riding, and target shooting.
***
Don't miss Martina in the role of Carmen this April!
“La tragédie de Carmen” adapted by Peter Brook, music by Georges Bizet
Friday, April 14, 2023, at 7:30 p.m.
Sunday, April 16, 2023, at 3:00 p.m.
Crowder Hall, $20, 15, 10
... See MoreSee Less

I know this will be a lovely performance, Martina!

The concert will feature the Arizona Symphony Orchestra and student soloists who won the highly competitive University of Arizona Concerto Competition. Featuring clarinetist Gloria Ines Orozco Dorado, performing the “Black Dog Concerto” by Scott McAllister; pianist Wenxin Guan, performing movements II and III of the Piano Concerto No. 1 in G Minor, Op. 25 by Felix Mendelssohn; mezzo-soprano Martina Portychova, performing “Nobles Seigneurs, salut!” from Les Huguenots by Giacomo Meyerbeer; and violinist Emmy Tisdel, performing movement I of the Violin Concerto in D major, Opus 35 by Piotr Ilyich Tchaikovsky. The students are selected from each area of the Fred Fox School of Music – strings, voice, wind and percussion, and keyboard. They represent the depth of talent at the school, shining in this performance with the Arizona Symphony Orchestra. Graduate students Yudai Ueda and Fátima Corona del Toro will conduct the students’ performances. The program will also include works by Myroslav Skoryk and Alexander Borodin, under the baton of Dr. Thomas Cockrell.

Clarinetist Gloria Orozco Dorado was born and raised in Colombia. As a soloist and chamber musician, she has performed in the United States, Colombia, Mexico, and the Netherlands. Gloria is a founding member of Q'iru Duet, a guitar and clarinet Chilean–Colombian duet that performs mainly Latin American music. Q'iru Duet was selected to perform at the International Clarinet Association's ClarinetFest 2022 in Reno, Nevada. In 2015, she created Soplan Vientos de Paz project (Winds of Peace are Blowing). Through this program, Gloria has been an in-residence teacher and has raised resources to donate musical equipment to the clarinetists in music schools of four towns going through a decades-long heavy civil war in Cauca, Colombia. Gloria won the 2018 Max Graves Moody Spirit of Innovation scholarship to continue her project in the isolated Leticia Amazonas. With the help of the University of Arizona Fellows Program Professional De-velopment Award, she continued with her initial project. In the summer of 2022, Gloria went to two different towns in Cauca and gave workshops at the Universidad del Cauca. Gloria won the Colombian Republican Bank Youth Artists Competition with ClarINÉS Clar-inet Quartet in 2015. She was selected through an audition to be part of the World Youth Wind Orchestra in 2015 and was a winner of the NEIU Concerto Competition in 2018. Gloria has earned degrees from Universidad del Cauca, Northeastern Illinois University, and Southern Illinois University. Currently a second-year doctoral student at the Universi-ty of Arizona, Gloria studies with Dr. Jackie Glazier under the auspices of a prestigious University Fellows Award.