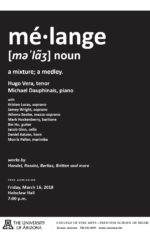 As an educator, he has served on the music faculties at New York University, the University of Kansas, and the Midwest Summer Music Institute. He taught various courses which included private voice, diction, and conducted the University of Kansas Men’s Glee Club, Oread Vocal Ensemble, and opera workshop. He keeps an active private voice studio in New York City. He is also general artistic director and founder of Lawrence Opera Theatre (LOT) a summer music performing company.

Michael Dauphinais has been hailed in the press as “a marvelous collaborative pianist” (“ITEA Journal”), and has garnered praise for his “superbly realized continuo” (“Arizona Republic”) as well as his live renditions of orchestral reductions: “pianist Michael Dauphinais enables one to forget the lack of an orchestra almost immediately” (“Newark Star-Ledger”). His versatility has led to collaborations with several opera companies in the United States including Tulsa Opera, Sarasota Opera, Kentucky Opera, Arizona Opera, Opera Southwest, Opera in the Ozarks and New Jersey Opera Theatre, and he has served as the music director for the Young Artists’ Ensemble at San Diego Opera. He has also performed duo, chamber, choral and vocal repertoire throughout the United States, Mexico, Ireland and Austria. Dauphinais has also served as a staff pianist for both regional and international conferences held by ITEA (International Tuba Euphonium Association) as well as the American Institute for Musical Studies (AIMS) in Graz, Austria. Michael Dauphinais earned degrees in music from Western Michigan University (BM) and Arizona State University (MM and DMA). He currently serves on the music faculty at the University of Arizona where he teaches solo and collaborative piano, and is the vocal coach for UA Opera Theater. He is the principal pianist/coach at Opera Southwest (Albuquerque, New Mexico) and senior vocal coach at Opera in the Ozarks. 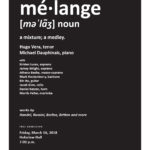