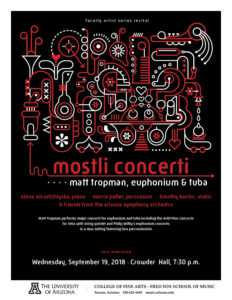 Dr. Matt Tropman currently serves as assistant professor of tuba and euphonium at the University of Arizona and is an active freelancer, soloist and chamber musician. His performances have been praised in numerous publications such as “The New York Times,” which stated, “Tropman makes a serious case for the euphonium as a solo instrument.” An active clinician and recitalist on both the euphonium and tuba, Matt has performed and taught throughout the United States. and Europe

Matt’s two commercially-released CDs, “Continuum” and “From the Balcony” (Summit Records), have been featured on programs such as NPR’s “All Things Considered.” He has performed with numerous bands, orchestras and chamber groups including the San Francisco Symphony and the Detroit Symphony. In his early career as a member of the U.S. Marine Band (President’s Own), he frequently performed as a soloist throughout the United States on the band’s national concert tours.

Bulgarian pianist Elena Miraztchiyska completed her Master of Music degree at the Yale School of Music in May 2010 as a student of Professor Claude Frank and Professor Boris Berman. Mrs. Miraztchiyska made her solo debut with the Bulgarian Chamber Orchestra in her home country at the age of 12 and since then she has performed as concerto soloist with the Varna Philharmonic, Sofia State, Arizona, and UNLV Symphony and Chamber Orchestras. She has appeared in solo and collaborative recitals in Bulgaria, Poland, Japan, and the United States. Elena is also a winner of numerous national and international competitions held in Bulgaria. In 2007, she was the grand prize winner of the MTNA National Young Artist Competition in Toronto, Canada and received a Steinway Model M grand piano. As a participant in numerous summer programs, she has worked with such artists as Emanuel Ax, Michel Beroff, Emanuel Krasovsky, Boris Bloch, Ursula Oppens, and Mykola Suk.

Violinist Timothy Kantor enjoys performing around the globe at some of the world’s greatest concert halls and chamber music series. As a member of the Afiara Quartet in Toronto, Mr. Kantor has performed hundreds of concerts and helped to develop several innovative projects. One of the quartet’s most recent projects, “Spin Cycle” with DJ Skratch Bastid, culminated with a Juno Award-nominated album and a solo performance with the Toronto Symphony. Collaborations include those with such varied artists as scratch DJ Kid Koala, Academy Award-nominated producer KK Barrett, and jazz virtuoso Uri Caine. Before joining the Afiara Quartet, Mr. Kantor was concertmaster of the Evansville (Indiana) Philharmonic and a founding member of the Larchmere String Quartet, in residence at the University of Evansville. He has performed as a member of the Kuttner String Quartet in residence at Indiana University, the chamber music and Quartet in the Community residencies at the Banff Centre, the Juilliard String Quartet Seminar and the St. Lawrence String Quartet Chamber Music Seminar. He has also performed chamber works with many of today’s leading musicians, including Joshua Bell, Jaime Laredo, Sharon Robinson, Atar Arad, William Preucil, Alexander Kerr, and the Pacifica Quartet. Mr. Kantor has been featured as an artist on American Public Media’s “Performance Today,” CBC Radio, and local classical radio stations in both Cleveland and Toronto. He is devoted to the performance of new music and has participated as soloist, concertmaster and chamber musician with the new music ensembles at the Cleveland Institute of Music and Indiana University. A dedicated teacher and coach, Mr. Kantor is the associate professor of violin at the University of Arizona Fred Fox School of Music. Mr. Kantor also teaches at the Kinhaven Music School in Vermont and the Programa Gabriel del Orbe in Santo Domingo (Dominican Republic). Mr. Kantor graduated with honors from Bowdoin College, earned a Master of Music degree from the Cleveland Institute of Music, and pursued doctoral studies at Indiana University. His former teachers include Jaime Laredo, Paul Kantor, Stephen Kecskemethy, Andrew Jennings and Mark Kaplan. Off the clock, Mr. Kantor enjoys auto racing and basketball.

Morris Palter’s wide-range of musical interests have found him performing throughout North America, Asia and Europe at prominent festivals, conservatories, colleges and concert venues including Disney Hall, Carnegie Hall, the Royal College of Music (London, United Kingdom) and IRCAM (Paris). Morris was an associate professor of music at the University of Alaska Fairbanks (2012-2017), and is currently an assistant professor of music at the University of Arizona. Morris is endorsed by Black Swamp Percussion, Sabian Cymbals, and is a Yamaha Performing Artist. morrispalter.org​​​