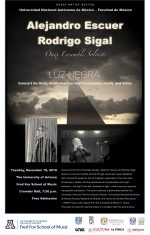 The University of Arizona Fred Fox School of Music presents “Luz Negra,” a concert for flute, multi-channel electro-acoustic music and video featuring award-winning Ónix Ensemble soloists, Alejandro Escuer and Rodrigo Sigal. The free-admission performance will take place at 7:30 p.m. in Crowder Hall on Tuesday, November 19, 2019. The public is invited to stay for a reception to meet the artists following the performance. This event continues a partnership between the Fred Fox School of Music, Universidad Nacional Autónoma de México/Facultad Nacional de Música, and Centro de Estudios Mexicanos – UNAM Tucson, with support from the Consulate of Mexico in Tucson.

Escuer and Sigal present a one-hour, nonstop concert through sound and visual metaphors that immerse the audience into an imaginary exploration of our own ways of listening in relation with the paradoxes and contradictions of human existence – the light in the dark, darkness in light, all of which become a personal introspective experience. The innovative format includes the use of different flutes and sounds, electroacoustic music including advanced audiovisual technologies and texts. The repertoire comes from many sound and video sources combined with live improvisation, contemporary concert music, classical music and folk influenced music. It is a project that raises originality in the art of forms and sounds, in accordance with the complexity and diversity of the sophisticated and interconnected listener of today.

The project is part of Ónix Ensemble (www.onixensamble.com) and has been awarded the México en Escena Award through the National Fund for Culture and the Arts in many occasions. Alejandro Escuer and Rodrigo Sigal have performed extensively in Mexico, Latin America, the United States, Canada, various Asian countries and Europe with great success.

Alejandro Escuer (Ph.D.) is a Mexican flutist, composer, sound and visual artist, improviser, and scholar noted for his many original projects. His philosophy is related to a kind of neo-humanism based on multidisciplinary perspectives, audible and visual, which coexist in his compositions, performances and improvisations, where graphic equivalencies interact with new technologies and formal concepts close to the humanities and social sciences: Alejandro Escuer is the creator and director of Ónix Ensamble since 1996, a recognized Mexican group specializing in contemporary music. In 2000 he co-founded with Dr. Rodrigo Sigal Lumínico, a multidisciplinary project platform for solo flute, real-time video and electroacoustic music (luminico.org). Escuer has premiered more than 250 works that have been dedicated to him for solo flute, flute electronics, flute and orchestra, flute and piano, guitar etc. He has recorded over 18 albums published by Urtext Digital Classics/Naxos. Alejandro has received many awards, including: National Association of Latino Arts and Cultures Award 2012; Creadores Escénicos con Trayectoria 2010-13 (FONCA-CONACULTA), many grants as a distinguished performer, including the Rockefeller Foundation-Bancomer-FONCA, Mexico en Escena program for Ónix Ensemble Project in seven occasions, a US Fulbright Garcia Robles, the first prize granted by the Independent Music Awards for best contemporary classical music album in 2014 and got a competitive position as a professor at the College of Music of the National Autonomous University of Mexico (UNAM). Escuer has given numerous concerts in Japan, China, Spain, Poland, England, France, Germany, Canada, Colombia, Venezuela, Costa Rica and especially in the United States. www.alejandroescuer.com

Rodrigo Sigal holds a Ph.D. in electroacoustic composition from City University in London, a BA in composition from the Musical Studies and Research Center (CIEM) in Mexico City, and was part of the composition workshop directed by Prof. Mario Lavista. He also studied with Denis Smalley, Javier Alvarez, Franco Donatoni, Judith Weird, Michael Jarrel, Alejandro Velasco and Juan Trigos, among others. He finished a post doctorate at the National School of Music in Mexico and he is the director of the Mexican Center for Music and Sonic Arts (www.cmmas.org). He holds a diploma on cultural management (BID/UAM) and does artistic and academic activities in Mexico and many countries. Sigal has received many national and international awards. His work is available in more than 14 compact discs. His music is presented in different countries. www.rodrigosigal.com