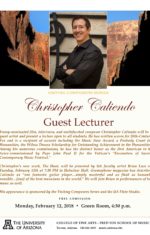 Emmy-nominated film, television, and multifaceted composer Christopher Caliendo will be a guest artist and present his Composing Success lecture open to all students.
COMPOSING SUCCESS is outlined as a 21st century guideline for composers in both undergraduate and graduate schools who desire skills towards establishing self reliance and accountability as composers and performers. It offers a vision of a musician transformed by a new ethical individualism. This course designed for those composers and performers who get up the day after graduation saying, now what do I do? Its objective is to offer the student valuable insight into developing their identity as an artist knowing who they are and having a corresponding action plan to do something about it.

He has written scores for 20th-Century Fox and is a recipient of awards including the Music Now Award, a Peabody Grant for Humanities, the Wilma Drama Scholarship for Outstanding Achievement in the Humanities.  Among his numerous commissions, he has the distinct honor as the first American to be twice-commissioned by Pope John Paul II for the Vatican’s “Encounters of Sacred Contemporary Music Festival.”

In addition, Christopher’s new work, The Hunt, will be premired by UA faculty artist Brian Luce on Tuesday, February 13th at 7:30 PM in Holsclaw Hall. Gramophone magazine has described Caliendo as “one fantastic guitar player…simply masterful and as fluid as humanly possible…[one] of the best musicians in the world.” He will join Brian Luce  in performances of his music as well.


His appearance is sponsored by the Visiting Composers Series and the UA Flute Studio.