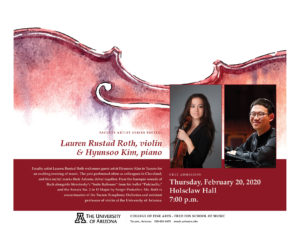 Faculty artist Lauren Rustad Roth welcomes guest artist Hyunsoo Kim to Tucson for an exciting evening of music. The pair performed often as colleagues in Cleveland, and this recital marks their Arizona debut together. Hear the baroque sounds of Bach alongside Stravinsky’s “Suite Italienne” from his ballet “Pulcinella,” and the Sonata No. 2 in D Major by Sergei Prokofiev. Ms. Roth is concertmaster of the Tucson Symphony Orchestra and assistant professor of violin at the
University of Arizona.

Sonata No. 3 in E major BWV 1016 by Johann Sebastian Bach

Pianist HyunSoo Kim has performed extensively throughout the United States, Canada, Europe, China and South Korea.  A much sought-after collaborative artist, Mr. Kim has performed with eminent artists such as Jaime Laredo, Sharon Robinson, members of the Cavani Quartet, Miami Quartet, Cleveland Orchestra, Philadelphia Orchestra, Boston Symphony and among others.

Mr. Kim was a member of the Collaborative Piano Staff at the Cleveland Institute of Music and Kent State University.  He also served as a studio pianist for Itzhak Perlman at the Perlman Music Program during Sarasota Residency.

He currently serves as a collaborative pianist at Texas Strings Festival. He is also the admissions director of ENCORE Chamber Music.

Lauren Rustad Roth is concertmaster of the Tucson Symphony Orchestra and was named Assistant Professor of Violin at the University of Arizona beginning in the 2013-2014 school year. Prior to these positions, she was concertmaster of the Canton Symphony. In May 2013, Ms. Roth earned a Master of Music degree from the Cleveland Institute of Music as a student of William Preucil, and she was accepted into his prestigious Concertmaster Academy.  She was a member of the Cleveland Pops orchestra and a substitute with The Cleveland Orchestra.

A native of Seattle, Ms. Roth received a Bachelor of Music degree in violin performance and a Bachelor of Arts degree in Italian studies from the University of Washington. She was a student of Professor Ron Patterson. During that time, she served as concertmaster of the Seattle Philharmonic Orchestra, Thalia Symphony, and Marrowstone Festival Orchestra. She has also appeared as concertmaster with the Jacksonville Symphony and the Buffalo Philharmonic.

Ms. Roth has performed as soloist with orchestras around the world. Recent highlights include her debut in the Czech Republic performing Mendelssohn’s violin concerto and solo engagements in Arizona with the Tucson Symphony Orchestra and the Chandler Symphony.  A dedicated teacher, Ms. Roth supports the violin studio at the University of Arizona giving instruction in performance, pedagogy, and orchestral repertoire. She spends summers as a faculty member of the Prague Summer Nights Festival, the Marrowstone Music Festival, and the National Taiwan Symphony Orchestra Summer Music Camp. She has served on the faculty of Carnegie Hall’s New York Orchestra Seminar program. Outside of music, Ms. Roth enjoys playing and watching sports, yoga, and spending time with her nieces and nephews.