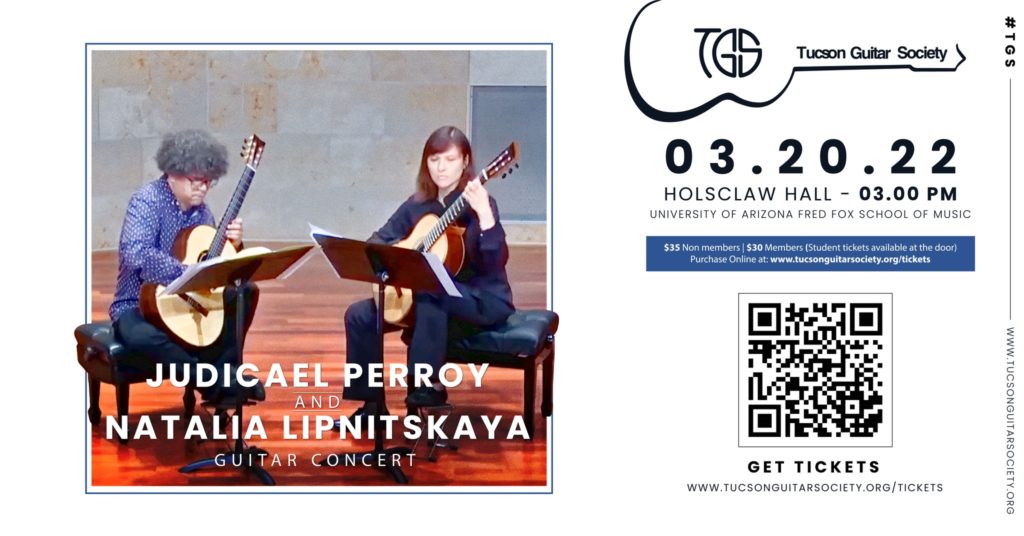 Judicaël Perroy is widely known as an extraordinary virtuoso classical guitarist and musician with several prizes to his credit. In 1997 he captured the prestigious first prize of the 15th Guitar Foundation of America International Competition and Convention awarding him tour of the United States and Canada with more than sixty concerts and master classes. During his GFA victory tour Mel Bay Publications recorded and published his live concert in Lubbock (Texas).  Following his GFA victory tour, a CD recording entitled “Aspen Suite” as well as his earlier CD recording on the French label QUANTUM received high praise and won 5 Diapasons, awarded by Diapason magazine and was subsequently re-released on Bayard Musique recording label in 2008. In 2016, he recorded a  CD of Ponce’s music (Naxos) which features the premiere of Sonata no. 2 as well as new CD for Contrastes Records titled “Paris est une solitude peuplée”. Judicaël’s current discography includes eight albums and one DVD. In addition, Judicaël has given many concerts in France that have been broadcast live on France-Musique. In 2017, Judicaël was appointed to the faculty at the San Francisco Conservatory of Music. He continues to hold a teaching position in Lille’s apPSEA (Association de préfiguration du Pôle supérieur d’enseignements artistiques) Nord-Pas-de-Calais,France.

Classical guitarist, pedagogue and recording artist Natalia Lipnitskaya has been a prizewinner in numerous international guitar competitions and has performed throughout Europe, the United States and Mexico. Born in Belarus, Natalia began playing guitar at age 9 and attended the Mikhail Glinka State Musical College (Minsk, Belarus) where she studied with Vladimir Belyshev and received a Teacher’s Diploma with highest honors. In 2004 she received the Artist Diploma from the Belorussian National Academy of Music (Minsk, Belarus) and was also awarded a diploma with highest honors. At the Academy, she studied with Evgeny Gridiushko. Natalia earned Bachelors and Masters of Music Degrees (2006 and 2008, both with honors) from the University of Music and Performing Arts in Vienna, Austria and studied with Alvaro Pierri. Natalia attended the Paris National Conservatory of Music and studied with Olivier Chassain as part of the European exchange program ERASMUS. Natalia is an experienced educator with a successful record of studio teaching and leading master classes. She has held past teaching positions at the Conservatoire de Courbevoie, Courbevoie, France (2010-2018) and at Pôle d’Enseignement Supérieur de la Musique Seine-Saint-Denis Île-de-France (2011-2017). Natalia has released a solo album of Bach transcriptions for guitar (Music Inside Records, 2014) and was featured on a 40-minute television portrait titled “The Guitar of Natalia Lipnitskaya,” BT1 National TV Channel of Belarus, 2005. She currently lives in San Francisco, California and teaches for the preparatory program of the San Francisco Conservatory of Music.