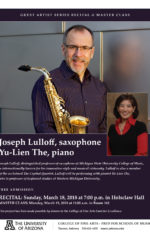 The University of Arizona Fred Fox School of Music presents a Guest Artist Series recital and master class featuring Joseph Lulloff, saxophone and Yu-Lien The, piano. The free admission performance will take place on Sunday, March 18, 2018 at 7:00 p.m. in Holsclaw Hall. The master classes will be held Monday, March 19, 2018 at 11:00 a.m. in Room 162.

Joseph Lulloff, distinguished professor of saxophone at Michigan State University College of Music, is internationally known for his innovative style and musical virtuosity. Lulloff is also a member of the acclaimed The Capitol Quartet. Lulloff will be performing with pianist Yu-Lien, who is currently on the faculty at Bowling Green State University.

A recipient of the Concert Artist Guild and Pro Musicis Awards in solo performance, and the Michigan State University Beal Distinguished Faculty Award, Yamaha and Vandoren Performing Artist Joseph Lulloff enjoys a prolific career as a saxophone artist and teacher. Lulloff has been featured as guest soloist with the Cleveland, Minnesota Orchestras, among others, and has also appeared as guest soloist with numerous chamber groups, including the US Navy Band, Dallas Wind Symphony, Music For All National Honor Band, Moscow Contemporary Music Ensemble, Polizeiorchester Bayern. He has concertized extensively throughout North America, Europe, South America and Asia, performing at notable venues such as Weill Recital Hall, Jordan Hall, the Smithsonian Institute, Carnegie Hall, Disney Hall, the Ojai Festival, the Moscow Autumn Festival, the KKL (Kultur- und Kongresszentrum of Luzern, Switzerland). Equally at home in classical and jazz, Lulloff performs with the Capitol and J4 Saxophone Quartets. He has also served as principle saxophonist with Detroit, St. Louis, Minnesota, Cleveland and Chicago Symphony Orchestras.

Currently Professor of Saxophone at Michigan State University, Mr. Lulloff’s students have won multiple prestigious national competitions, including the Fischoff, Coleman, Carmel, North American Saxophone Alliance, Plowman, and MTNA Competitions. He has received the Withrow Excellence in Teaching Awards, and alumni of his studio have found success in performing with the nations top military bands to teaching at notable universities throughout the country. During summers, Mr. Lulloff teaches at the Great Plains Saxophone Workshop in Oklahoma, and at the Brevard Music Center Summer Music Institute in North Carolina.

Yu-Lien The has performed throughout the US, Europe and Southeast-Asia, including appearances as a soloist with the Nordwestdeutsche Philharmonie, the Kammerorchester Hannover and the Baroque Orchestra L’Arco. Other notable performances include a two-piano recital with Lori Sims of Messiaen’s “Visions de l’Amen” in 2008 and a lecture recital of “The Other Diabelli-Variations” in 2012, both at the Gilmore International Keyboard Festival in Kalamazoo, Michigan. A prizewinner of the 12th International Piano Competition Viotti-Valsesia (Italy) and the Deutsche Musikwettbewerb, she was admitted to the National Concert Podium for Young Artists (Germany), which led to several concert tours with violinist Tomo Keller. Ms. The has been involved in a number of commissions and world premieres. She frequently collaborates with saxophonists Joe Lulloff and Henning Schröder as well as composers Dorothy Chang, Keith Murphy and Carter Pann. During her tenure with the new music ensemble Opus21, she worked with composers Anna Clyne, David Lang and Frederic Rzewski, which culminated in premiere performances at Symphony Space (New York) as well as Zankel Hall at Carnegie in 2007 and 2008, respectively.

Born in the Netherlands, Yu-Lien The received most of her musical training in Germany, where she obtained degrees in both piano and recorder performance and pedagogy from the Hochschule für Musik und Theater Hannover. She has earned an Artist Diploma from the Hochschule für Musik Detmold as well as a D.M.A. in piano performance from Michigan State University. Her principal piano teachers were Arie Vardi, Anatol Ugorski, Deborah Moriarty and Lori Sims.

Yu-Lien The is Assistant Professor of Keyboard Studies at Western Michigan University and has previously served on the faculties at Bowling Green State University, Valparaiso University and Kalamazoo College. 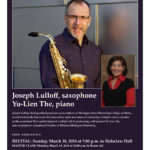