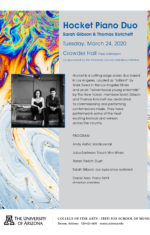 Co-sponsored by the American Culture and Ideas Initiative

Hocket is a cutting- edge piano duo based in Los Angeles. Lauded as “brilliant” by Mark Swed in the Los Angeles Times and as an “adventurous young ensemble” by The New Yorker, members Sarah Gibson and Thomas Kotcheff are dedicated to commissioning and performing contemporary music. They have performed in some of the most exciting festivals and venues across the country. This concert will feature the American première of Daniel Asia’s “Piano Set II“.

Julius Eastman: Touch Him When

Sarah Gibson: our eyes once watered