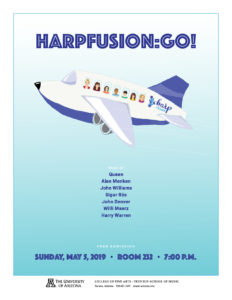 Hunter Ackerley (20, Tucson) is majoring in Psychological Science at the University of Arizona. She also runs a non-profit organization called CCAP Across The Map whose mission is bring awareness to cervical cancer and provide preventative resources for women. Hunter is passionate about the harp, an instrument she has been playing since the age of 8!

Sarah Carruth (21, Tucson) is a junior studying Special Education and Rehabilitation with a minor in Deaf Studies. She started playing the harp at the age of 8 with the St. Paul’s United Methodist Harp Choir under the direction of Dr. Carrol McLaughlin. Sarah works passionately to support others with intellectual and developmental disabilities, using the harp as a vehicle for interactive therapy.

Katie Damon (21, Park City) is a fourth-year undergraduate student in Harp Performance and Russian. Katie was hugely influenced by Dr. Carrol McLaughlin, having studied with her at summer camps starting at age 9, as well as via Skype lessons beginning at age 14. Most recently, Katie recorded a new work for solo harp entitled “Fresh Powder” by Kincaid Rabb for the USA International Harp Composition Contest.

Victoria Gonzalez (21, Tucson) is pursuing a double-major in Harp Performance and East Asian Studies (Japanese Culture Emphasis). She grew up playing in the St. Paul’s United Methodist Church Harp Choir, led by Dr. Carrol McLaughlin, a program which she is now leading. In the summer of 2018, she traveled to Belgium, Netherlands, Germany, Denmark, Poland, Lithuania, Latvia, and Estonia, to study Medieval Europe. In her spare time, Victoria enjoys listening to film scores and reading.

Xiaodi Xu (26, China) is a third-year DMA student. Xiaodi has had a very successful year, winning second place in the University of Arizona Concerto Competition (String Sector) and first place in the White Mountain Symphony Orchestra Concerto Competition. In addition to the harp, she loves spending time with Diana (her cat), traveling and experiencing different cultures.

Dr. Michelle Gott is an award-winning, versatile harpist and a dual citizen of the United States and Canada. An experienced orchestral musician, Ms. Gott has subbed extensively with the National Arts Centre Orchestra, including their Canada 150 Tour to the Atlantic Provinces. She has also worked with the major orchestras of New York, Boston, St. Louis, Toronto, and Vancouver. As a soloist, she has been featured with Symphony Nova Scotia (Halifax) and the Newfoundland Symphony Orchestra, as well as at the National Arts Centre and the National Art Gallery in Ottawa. As winner of the 2009 Juilliard Concerto Competition, she made her Lincoln Center debut at Alice Tully Hall performing Mozart’s Concerto for Flute and Harp. Ms. Gott has also performed for productions on Broadway, including The Producers and The Fantastiks and for artists such as Diana Krall and Olivia Newton-John.

An avid performer of contemporary music, Ms. Gott has worked closely with many composers including Andrew Staniland, Roddy Ellias, Virko Baley, Anthony Cheung, and Nico Muhly. Notable performances include the 2018 premiere of Ellias’ Sleeping Rough, a modern-day opera combining classical, jazz and popular music as well as puppetry. She can also be heard on recordings of John Adams’ Scheherazade.2 with the St. Louis Symphony (February 2016), Walter Boudreau’s Concerto de l’asile with the National Arts Centre Orchestra (February 2018), and on Anthony Cheung’s Centripedalocity with the Talea Ensemble. Other projects include the premiere of Exit Eden for flute and harp, by Juno-nominated composer Andrew Staniland, commissioned and presented by the National Arts Centre Orchestra in July 2017, as well as the world premiere of Nico Muhly’s opera, Dark Sisters (2011) in New York City.

A winner of numerous national competitions in the US, Ms. Gott is also a recipient of Juilliard’s Peter Mennin Prize for Outstanding Leadership and Achievement in the Arts as well as the Richard F. French grant for her doctoral document research on the music of Canadian composer R. Murray Schafer. Originally from Las Vegas, Ms. Gott began harp studies at the age of four with her late mother, Caryn Wunderlich-Gott. She then went on to study with Nancy Allen at The Juilliard School where she completed three degrees (BM, MM, DMA). As an educator, she served as director of harp ensembles from 2013-2018 for the Ottawa Youth Orchestra Academy and on the harp faculty at the University of Ottawa. She joined the University of Arizona as Assistant Professor of Harp in fall 2018. She is also co-founder of the True North Harp Retreat, a two-day summer intensive based in Ottawa, Canada for advanced harp students.