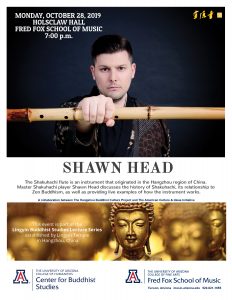 The American Culture and Ideas Initiative and the UA Center for Buddhist Studies presents Shakuhachi Master Shawn Head. This free-admission guest presentation will take place on Monday, October 28, 2019 at 7:00 p.m. in Holsclaw Hall.

The Shakuhachi flute is an instrument that originated in the Hangzhou region of China.

Master Shakuhachi player Shawn Head discusses the history of Shakuhachi, its relationship to

Zen Buddhism, as well as providing live examples of how the instrument works.

Shawn Renzoh Head is at the forefront of Japanese traditional music and its expansion into the western world. At age 18, he became the youngest non-Japanese Shakuhachi Shihan (master) in history. In 2019, Shawn received the distinct honor of becoming an OSS 大将軍 Tai Shogun, given to him for his work in traditional Japanese music by Ronald Watt 9th Dan Shotokan Karate and Order of the Rising Sun (Japan’s top civilian award). Head earned a bachelor’s degree in composition from the Cleveland Institute of Music, and is currently based in Houston, Texas.

This project has been made possible by donors to the American Culture and Ideas Initiative at the Fred Fox School of Music and the Lingyin Temple via the Center for Buddhist Studies in the College of Humanities.