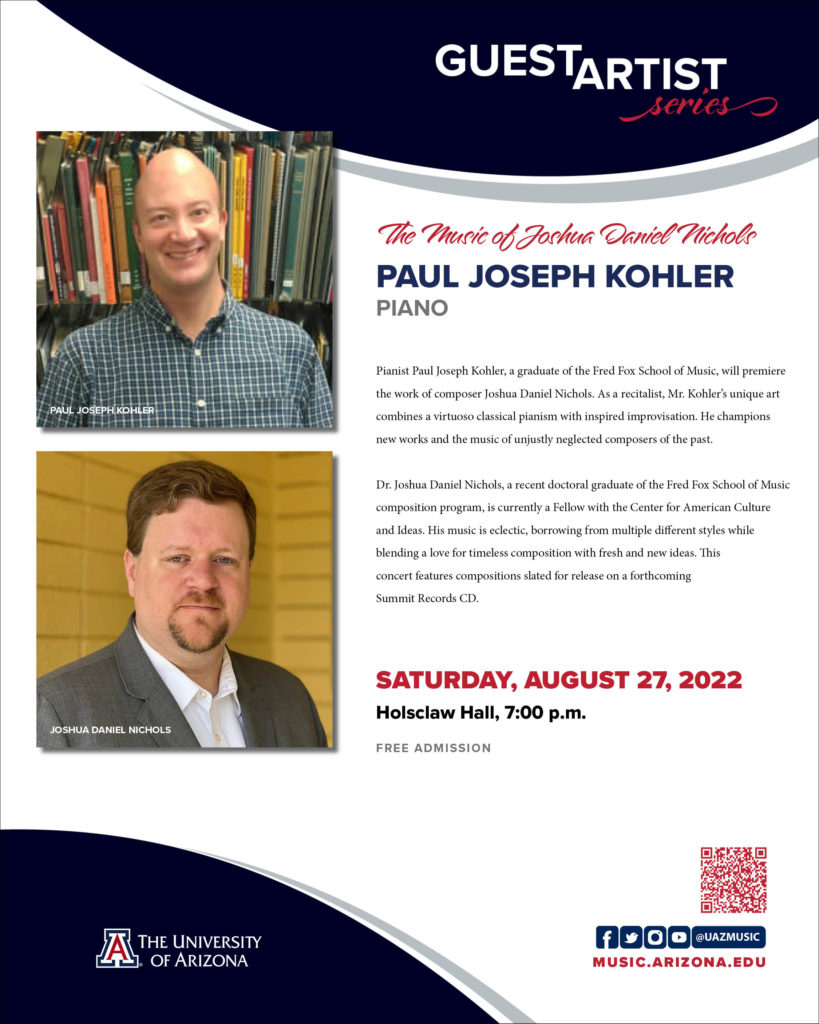 Pianist Paul Joseph Kohler, a graduate of the Fred Fox School of Music, will premiere the work of composer Joshua Daniel Nichols. As a recitalist, Mr. Kohler’s unique art combines a virtuoso classical pianism with inspired improvisation. He champions new works and the music of unjustly neglected composers of the past.

Dr. Joshua Daniel Nichols, a recent doctoral graduate of the Fred Fox School of Music composition program, is currently a Fellow with the Center for American Culture and Ideas. His music is eclectic, borrowing from multiple different styles while blending a love for timeless composition with fresh and new ideas. This concert features compositions slated for release on a forthcoming Summit Records CD.

Dr. Joshua Nichols (DMA, The University of Arizona) is a seasoned and in-demand composer of art music for chamber ensembles and large ensembles. His recent work Hansel und Gretel premiered at the University of Arizona Wind Ensemble under the direction of Dr. Chad Nicholson. He was recently commissioned to write What Tongue Can Tell? for chamber ensemble and choir by The First Presbyterian Church of Baton Rouge, LA, under the direction of Mr. Christopher Phillips.

Dr. Nichols is a Fellow and Composer at the Center for American Culture and ideas. His work involves co-authoring a book on culture and arts with Dr. Robert Gordon, as well as producing a podcast called The Gateway on arts, culture, and ideas. As a part of his fellowship, he writes new music.

Paul Joseph Kohler began music study at the age of 12, showing gifts for the piano, organ and composition. He has performed at the McClelland Arts Center, Columbia Theater and other notable venues. In 2010 he completed undergraduate studies in music and philosophy at Utah Valley University. He has studied with Michael Lobberegt of the Mozarteum, Sofia Rosoff (the major protégé of legendary piano pedagogue Abby Whiteside), and Steinway Artists Hilary Demske and John Milbauer. Mr. Kohler has made an extensive study of music history, the piano literature and theories of piano technique. As an artist, he specializes in new music, improvisation, and championing unjustly neglected composers of the past. He completed a Master of Music degree in piano performance at the University of Arizona, working primarily under the great Paula Fan.

Ballade is a work based on the initial statement of a five-note theme. There are a series of dramatic transformations and elaborations of this theme, exploring its various emotional possibilities. The theme presents a double-harmonic duality, a “major/minor” sound which resolves by the end. The middle section is an “elevation” or presentation of a calm-yet-not affect which contributes to an uneasy yet pleasant respite until the apex. A kind of “Sturm und Drang” leads the character of this music into a more insidious and malevolent variety of emotions, and the peak of the work carries the description, “Murderous.” The theme by this point is undone emotionally speaking and goes through a series of unsettling deconstructions harmonically and rhythmically. Clusters finish this work, leading the listener back to a question posed at the beginning: Is this theme major or minor?

Variations on a Russian Theme is based on Pavel Chesnokov’s “Spaséñiye, sodélal,” or in English “Salvation is Created.” This is a haunting work of sacred choral music written in the early 20th century. It was one of the final pieces of sacred music that he wrote before being exiled from Russia during the early 20th century Soviet suppression of Christianity. Chesnokov was never able to hear his own composition. The variations were written as a tribute to Russian music for pianist Dr. Eleni-Persa Stavrianou for her Russian-themed recital.

The theme is quite simple and is presented nearly verbatim to that of the original score. The variations are a reflection of various emotional aspects of the original words: “Salvation is made in the midst of the earth, O God. Alleluia.” There are 5 variations, each with quite distinct levels of tact and tethering to the original theme. “Variation 1” is distorted, brooding, with the theme being gnarled and twisted like an old tree, heavy with darkness, opaque and smoky. In this variation, the theme can be heard embedded in the texture, and it may be difficult to catch upon a first listening.

“Variation 2” is a complete departure from the first, with the theme clearly heard in the tenor range, and an accompaniment like a flitting and fluttering bird. By the end of this variation, there is some concern or question of whether or not the theme decays to the same level as the accompaniment.

“Variation 3” is jokingly called “in Major” as the theme appears embedded in a major “mode” in the right hand. Where is it? Disguised as the soprano, although it glints with the texture of a prism or gemstone.

“Variation 4 – Elevation” is an homage to Messiaen. Pealing dissonance, bells, and a theme disguised in between a celestial echo are described in this movement. Time stands still, as the music haunts on a moment-by-moment basis.

“Variation 5” is quick, with the theme presented in the bass/tenor region. Here it is most tonal, with a pounding bass line and a rapid accompaniment. I imagine the horrors of the early- to mid-20th century as a religious man is driven out of his own country by ideology. The theme flees  and evaporates with a whimper.

Moments Musicaux is a set of three pieces standing independently from each other. The first piece is called “A great slide with a side of funk.” Here, there are two objectives: to slide as if on a giant slide, propelling downward musically and registrally, as well as to “funkify” the underlying rhythmic structure. There is a lot of suggestive musical humor, including pop-culture references, and some classical music references. Ultimately, what comes to roost in this piece is the funk.

The second piece is “Resting with no rest,” with nearly every down beat avoided or obfuscated. The piece begins compressed, gradually expanding through the middle, then coming to rest compressed again at the end. The downbeat is nigh impossible to detect.

The third and final piece, “Marching hazard,” is in a simple ritornello form, with greater variation of the primary theme returning each time. Each time the theme returns, it returns more ridiculous and exaggerated than the last, culminating in the presentation of a nightmare-fueled fughetta.

Metropolis is a piano sonata written in a quasi-programmatic fashion, observing various landscapes. The first movement, from which the title is taken, is a metropolis of sorts whose form is palindromic. All thematic material for this movement is presented at the beginning, focusing on the half-step hidden in the presentation of a sacred melody, with towering chords evoking large structures and skyscrapers. Though not intentionally programmatic, the imagery of a bustling and nervous metropolis is a fair image to keep in mind. A clue: the tune is found in the Requiem mass but is not the Dies irae.

The second movement is called “Meadow” and is a significant departure from the first. In this movement, imagery of grassy fields on a cool spring night is appropriate. It remains calm, though dew and moonlight glisten and keep the field alive. A more tonal second area relaxes a bit more before a fervent romantic outburst sets off. After things settle down a bit, we return where we started: lying in the field, basking in the moonlight.

The third and final movement, “Suburb”, is a reflection of what might possibly be just as intimidating as a city, but with more speed-defying driving and vignettes of suburban life. It was impossible to resist being humorous, and this rondo theme returns many times, playful and childlike. As if in slow motion, private lives of suburban life are revealed, such as the piano practice of a teenager, the illegal drag strip (a.k.a. the cul-de-sac), and the manic ramblings of a neighbor. Suddenly, a fugue takes over, and a screeching halt to this joy ride begs the question, “when will any of this stop?” What stops it all is the return of “Metropolis” in the coda as if in a fever dream, before the closing rondo theme repeats, drawing the sonata to the close.

A quick word about musical humor: I have found a unique delight in my own music to embed the little earworms of my musical career into the music I write, and that is certainly evident throughout. Though I don’t mention it in every place, carefully suggestive statements of themes from popular music, famous classical works, and other such things are an integral and celebrated part of how and what I write.