The University of Arizona Fred Fox School of Music presents members of the Tucson Symphony Orchestra and UA faculty performing chamber works in duet and trio combinations in a short recital titled “Strings and Things.” The free-admission performance will be held at 1:00 p.m. in Holsclaw Hall on Saturday, February 17, 2018.

Michelle is a founding member of the Thalia String Quartet and has presented educational music programs in the Cleveland Public Schools as well as in the Banff and Bow Valley communities in Alberta, Canada while in residence at the Banff International String Quartet Competition. An active chamber musician, Michelle has appeared in performance with the Afiara String Quartet and renowned DJ Kid Koala, and also served on the advisory board and performs regularly on the M.U.S.i.C. (Musical Upcoming Stars in the Classics) concert series in Northeast Ohio.

Deeply committed to music education, Michelle teaches both traditional and Suzuki violin in her private studio in Tucson, Arizona. She taught previously at The Music Settlement, the Hathaway Brown School, and the Oberlin Community Music School in Ohio. She has taught the past several summers at the New England Music Camp in Maine, and last year founded the Intensive String Quartet program at NEMC. Michelle holds a Bachelor of Arts degree from Stony Brook University, a Master of Music degree from the Yale School of Music, and an Artist Diploma from the Cleveland Institute of Music. She studied with Philip Setzer of the Emerson String Quartet, Pamela Frank, Ani Kavafian, and Paul Kantor. A Connecticut native, Michelle enjoys watching basketball and playing with her pets Seppe and Ella.

Ivan Ugorich, viola
As an avid chamber musician, Ivan has won The McCauley Chamber Music Competition with his quartet in 2012, and has competed in the International Chesapeake Chamber Music Competition as a 2016 finalist with the Cerulean Trio. He has also performed with his two groups on the radio with WUOL 90.5 and WFSQ 91.5 respectively. As a founder of the Cerulean Trio, with clarinetist Jackie Glazier and pianist Galen Dean Peiskee, Ivan travels and performs at venues throughout the country. This past May, he appeared with his trio in Carnegie Hall as part of the program titled “Home and Abroad.”

Ivan performed with orchestras including the Sarasota Orchestra, the Florida Orchestra, and the Orlando Philharmonic. Additionally, he won the position of principal violist with Symphony Orchestra Augusta, where he served from 2014-2016. Other performance opportunities have taken him to Germany, France, Spain, Poland, Denmark, and China. Engagements have included performances with notable artists such as Itzhak Perlman, Joshua Bell, Lang-Lang, Anne-Sophie Mütter, Midori, Guy Braunstein, Boston Pops, Pink Martini, and Time for Three. Ivan earned a Bachelor of Music degree in performance from Indiana University Jacobs School of Music and a Master of Arts degree from Florida State University. Ivan currently works at the University of Arizona Fred Fox School of Music and subs with the Tucson Symphony Orchestra, Tucson Pops, and Arizona Opera.

Ian Jones, cello
A native of Oakland, California, Ian Jones fell in love with the cello and chamber music while attending The Crowden School, a Berkeley middle school which incorporates music into the everyday curriculum. His studies took him to UCLA and Indiana University, and he continued at IU for graduate studies with Eric Kim and Janos Starker. A committed chamber musician, in 2008 his string quartet was awarded the school-funded Kuttner Quartet fellowship at IU. He has benefited from close collaboration and coaching with Indiana faculty members including Atar Arad, Alexander Kerr, Paul Biss and Yael Weiss, and has appeared performing chamber music with Joshua Bell and members of the Orion Quartet among others. He earned a Master of Music degree in performance from the University of Arizona in 2013 studying with Mark Votapek.

Ian began his orchestral career in 2006 playing in the cello section of the Honolulu Symphony, and has since performed with ensembles around the Midwest and Southwest. He joined the Tucson Symphony Orchestra in 2011, and has since been appointed assistant principal cello. Apart from the Symphony, he has performed with other arts organizations around Arizona, including Tucson’s St. Andrews Bach Society, where in 2015 he was a featured performer on an all-solo Bach program, and Phoenix’s Downtown Chamber Series. In 2016 he was invited to fill in as cellist of the Baumer String Quartet, performing and teaching at the Summer String Institute at the University of North Texas.

Beginning in 2012 he has appeared in Colorado on the Breckenridge Music Festival’s Winter Concert Series, and since 2014 spends his summers with the BMF for their regular concert season. An avid tennis player, Ian competes in USTA leagues in Tucson and the San Francisco Bay Area.

Rachel Kay Green, harp
Rachel Kay Green is interim assistant professor of harp at the University of Arizona, where she leads HarpFusion, one of the world’s largest touring harp ensembles, known for its creativity and energy.

Rachel has toured extensively, giving solo recitals in Hong Kong, at the Rio Harp Festival in Rio de Janiero, Brazil, in New York’s Carnegie Hall, and throughout the United States. She has performed for the American Musicological Society, the College Music Society and as first harpist for the Summer Opera Program at the International Lyric Academy in Italy. As concerto soloist, she has appeared with the Tucson Symphony Orchestra, the University of Northern Colorado Symphony Orchestra and the Arapahoe Philharmonic. 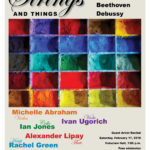