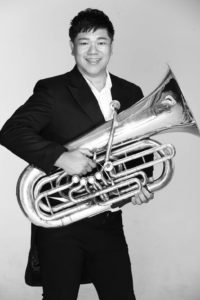 Chih Wei Tang was born in Taitung County in Taiwan and started taking piano lessons when he was five years old. He went to Guangren Catholic Music School for junior and senior high school, majoring in and minoring in piano. He graduated from the Taipei National University of the Arts, one of the top music schools in Taiwan. During this time, he won first place in the National Youth Solo Tuba Competition and became a well-known soloist in Taiwan. Chih Wei’s chamber group, Impression Brass Quintet, also won first prize in the National Student Competition of Music. Between 1995-2000, this group toured throughout Taiwan each year, including as part of major government projects like the Taitung County concert series, the Taiwan Indigenous People Cultural Development’s concert series, and participated in the Fund-Raising Telethon for Disaster Relief Concerts.

Chih Wei received his Master of Music degree in Musik-Akademic der Stadt in Basel, Switzerland, majoring in tuba performance while studying with Professor David LeClair. During his time in Switzerland, he participated in the contemporary chamber group “Swiss Brass Menagerie,” and performed in the movie festival “Panzekreuzer Potemkin.” Chih Wei was a prizewinner of a competition in Markneukirchen, Germany in 2008, tubist in Collegium Musicum Orchestra and Phoenix Ensemble in 2009, and performed with the Bayerischen Philharmonie in 2010. In 2009, Chih Wei hosted a tuba festival in Taiwan featuring world-renown artist and pedagogue Roger Bobo. Previously he has participated in master classes with Oren Marshall, Gerard Buquet, and Mel Calburtson.

Chih Wei continues performing with the Impression Brass Quintet, where they perform in the Philippines, Japan and China. He has appeared with the Taiwan Soloists Symphony Orchestra, Taichung Symphony Orchestra, the Taiwan Wind Symphony, Xi-an Symphony Orchestra (China), and the Kaohsiung Brass Quintet. Between 2012 and 2017, he has performed many solo recitals, including at the Kaohsiung Cultural Center, Taitung Cultural Center, Xiamen University, and the Beijing Contemporary Music Academy. Chih Wei is a faculty member at both Taitung University and the Tainan National University of the Arts.