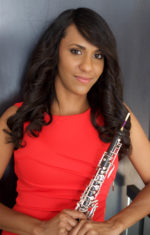 The University of Arizona Fred Fox School of Music presents a guest artist recital and master class featuring oboist Nermis Mieses. The performance will be held at 7:00 p.m. in Holsclaw Hall on Wednesday, January 24, 2018.

Nermis Mieses is the Assistant Professor of Oboe at Bowling Green State University in Ohio and principal oboe of the Michigan Opera Theatre in Detroit. First American to place as finalist in the prestigious Barbirolli International Oboe Competition held in 2014; first place at the 2011 First International Oboe Competition in Santa Catarina, Brazil; Best Interpretation of Brazilian Music Prize; as well as second place at the 2012 Society for Musical Arts Young Artist Competition in Ann Arbor, MI. She has appeared in solo performances at the Kennedy Center for the Performing Arts, the Cranbrook Music Guild Series in Bloomfield Hills, MI, has soloed with the Puerto Rico Symphony Orchestra, Michigan Philharmonic Orchestra, BGSU Philharmonia, BGSU Wind Symphony and toured Denmark as soloist and chamber musician with the Thy Chamber Music Festival (2011, 2013). She has presented masterclasses and recitals in Florida, Texas, Michigan, Nebraska, Indiana, Ohio, New York, Georgia and Wisconsin. Formerly principal of the Michigan Philharmonic, she has also performed with the Ann Arbor, Sphinx, ProMusica Chamber, Rochester, Lexington, Puerto Rico Symphony as well as the National Repertory Orchestra, Sewanee Music Festival, Idyllwild Arts and FOSJA. She held previous teaching positions at the University of Kentucky, Ohio Northern University and Hillsdale College. She holds D.M.A. and M.M. degrees from the University of Michigan under Dr. Nancy Ambrose King.