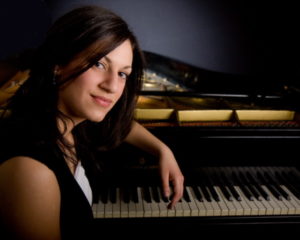 Yasmin Alami will teach a masterclass featuring undergraduate and graduate piano performance students from the University of Arizona Fred Fox School of Music. This event is free and open to the public.

Yasmin Alami has been called “a truly remarkable young pianist” and “extremely musical” by the renowned pianist and conductor Philippe Entremont. A Jordanian pianist, Miss Alami established herself as an international musician appearing as both a soloist and chamber musician. She has given extensive performances across the Middle East, Europe, and the United States.

Most recently, she was invited to perform at the Santa Cruz Foundation of the Arts in Arizona, Friends of Jordan Piano Festival in Jordan, and The Old Westbury Gardens Music Series in New York.

Born in Amman, Yasmin started playing the piano at an early age and at 18 she moved to France to continue her musical education. For two consecutive years, she was awarded the First prize as a soloist and chamber musician from the Conservatoire National de Tours (2004) and First prize as a soloist at the Regional Piano Competition held in Orléans, France (2005). In 2006, Miss Alami was invited to perform a private solo recital to Her Royal Highness Princess Wijdan Ali whom subsequently granted her a full scholarship to continue her musical education, and in 2009 she had made her New York debut recital at Steinway Hall. Other notable performances include Ecole Normale de Musique- Alfred Cortot in Paris (France), Bibliotheque Communale de Braine l’Alleud in Brussels (Belgium) Municipal Theater Baltazar Dias in Madeira (Portugal) the, Salle Ockeghem and Espace Malreaux in Tours (France) amongst others.

Yasmin holds a Master of Music degree in piano performance from the Manhattan School of Music, a Bachelor of Music degree in piano performance and chamber music from the Conservatoire National de Région de Tours, and a Bachelor of Arts in musicology from the Universite Francois Rabelais de Tours, in France. Her major teachers include Philippe Entremont, Andre-Michel Schub, Nelson Delle Vigne, and Philip Kawin. She now lives in Tucson, Arizona with her husband. She is currently the only Jordanian pianist performing in North America.

Olivia Bustos from Brentwood, California is an undergraduate music education major at the University of Arizona Fred Fox School of Music.

There is still time to give:
To Music with Love: In direct support of our students

Thanks to the generous support of our donors, we have hit our scholarship fundraising goal of $10,000! The crowdfunding campaign which directly supports students, ends on March 15, 2021. Let’s see how many more students we can support!

Your generosity helps students to pursue their goals and enrichen their musical knowledge, growth, and experience at the University of Arizona.

University of Arizona students are invited to Take-A-Break on Reading Day!

Join us on the UA Mall for some sunshine and a relaxing break from your studies. There will be a free outdoor Yoga class offered by Campus Recreation, and grab-and-go fruit smoothies and healthy snacks.

Pre-registration is required and capacity is limited.

What to Bring:
Your own Yoga mat or towel
Mobile phone for QR Code check-in and Wildcat Wellcheck Completion
Face Mask - required at all times in all UA buildings and outdoor spaces
FYI … Reading Day- No classes
2021 Spring Break has been replaced with a series of Reading Days spread throughout the Spring 2021 semester.

The following days will be designated as Reading Days and will allow students and instructors to take needed breaks during the academic term:

There is still time to give:
To Music with Love: In direct support of our students

Throughout this time, and dating back to 2010, he worked to complete a masterpiece— a book of advanced violin repertoire reflecting the musical globalism and diversity of the 21st century.
By the last day of 2020, he finally published his “24 Caprices for Solo Violin”. The book is now available on his website, . Here are his words about this exciting contribution to the string world.

"This 68-page compilation of advanced solo violin repertoire I have worked for more than 1/3 of my life.

The choice to write “24” is a tribute to four violinists, revered from the 18th century through today:

All of them wrote 24 caprices for solo violin, and each set evolved the art of violin performance forevermore. After Dont, the 24-caprice tradition abruptly stopped for over 170 years, until now!

Mine are are performance pieces — not études like Gaviniès, Rodes, or Dont — and more akin to Paganini’s, in this way.

My set started from always seeking out very diverse audiences, and always writing my own music for them whenever possible. These included large rock-concert amphitheaters, juried doctoral-recitals, yoga summits, American String Teacher’s Association (ASTA) conferences, a livestream series in Nigeria, university commencements, solo soundtracking for theaters and film festivals, and much more.

Over the years, my twenty-four favorites from those performances became my “24 Caprices for Solo Violin”. This multi-genre collection contains clear influences of the baroque (three fugues), romanticism, impressionism, jazz, American fiddle, rock, tango, and more. They are all new, tonal, and eclectic compositions that purposefully fill the gaps I experienced in the extant solo violin repertoire.

Most importantly, this collection reflects musical globalism and diversity that is appropriate, and due, to the 21st century. Distribution has already reached Mexico, Egypt, and Russia.

Over the years several of these have been distributed individually. I have enjoyed many brilliant performances by colleagues, professors, students, and other artists. Here, for the first time, all twenty-four are presented together. I enthusiastically look forward to every performance following this edition!”

Dr. Immanuel Abraham, Violinist 🌸 Congrats! I still have my copy of “Caprice No 1” from Yehonatan’s studio freshman year! 😍 💕