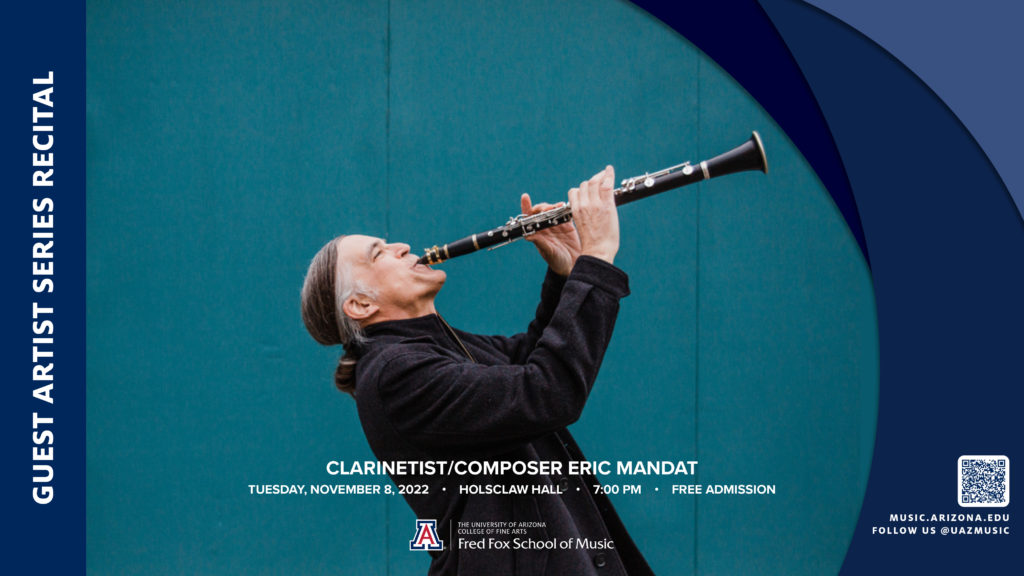 Clarinetist/composer Eric Mandat will present a recital of his compositions on Tuesday, November 8 at 7:00 pm in Holsclaw Hall. The program will include his solo compositions, Rrowzer!, The Moon in My Window, selected movements from Chiral Symmetries, and his work for clarinet and interactive electronics Tunnel Diode Flux. He will also be joined by School of Music faculty clarinetist Dr. Jackie Glazier for a performance of his new work Five Miniatures for two clarinets. Mandat’s compositions explore new sound worlds for the clarinet, particularly multiphonics, microtones, and timbral modulations. He has performed and presented master classes throughout the world, and he has received numerous awards for his innovative compositions. Eric Mandat is Visiting Professor of Clarinet and Distinguished Scholar at Southern Illinois University, where he has taught since 1981.

Mandat tours world-wide as a soloist and chamber musician, presenting lectures and recitals featuring new American clarinet music as well as traditional repertoire. He has premiered his works at international conferences in Chicago, Stockholm, Tokyo, Vancouver, and Porto, and has appeared as soloist with the Latvian National Chamber Orchestra, the Chicago Chamber Orchestra, and the Cleveland Chamber Symphony. Mandat is a member of the Chicago Symphony’s MusicNOW ensemble, which recently performed works by Elliott Carter and Bruno Mantovani under the direction of Maestro Pierre Boulez. He also performs with The Transatlantic Trio, which has concertized in the United States and Europe. Of the group’s recording of trios by Brahms and d’Indy, Fanfare states they “easily rank with the best available recording. Highly recommended!”

Mandat is also a member of Tone Road Ramblers, an eclectic sextet specializing in improvisation and experimental music. They perform at such venues as Merkin Hall in New York and new music festivals nationwide, and are presented by such organizations as the World Music Institute. Their CD, Intersections & Detours, is described by Option magazine as “filled with wit, joy and creative sparkle.” Their latest CD, Dancing With the Ramblers features Mandat’s Dark Energy, together with extended works by Morgan Powell and John Fonville.

As a composer, Mandat focuses primarily on solo and chamber works for clarinet. His compositions utilize extended techniques within a framework largely influenced by jazz and traditional music of non-Western cultures. The Clarinet finds that his ” process at writing and playing is bound to leave any listener in awe… (One) is constantly challenged and surprised by gorgeous tone color changes, exciting rhythmic action and 21st century clarinetistry.” Of his latest CD of his compositions for clarinet, Black Swirls, The Clarinet raves, “Mandat provides tremendous musical interest with his impressive display of tonal colors, dynamic control…rhythmic variety and groove, and imaginative playing.” Mandat is a recipient of the 2000, 2005, and 2009 Illinois Arts Council Artist Fellowship Awards for composition. His music is featured in concerts and recordings by clarinetists throughout the world.

Mandat received his education at the University of North Texas (B.M.), the Yale School of Music (M.M.), and the Eastman School of Music (D.M.A.). His principal teachers included Richard Joiner, Lee Gibson, Keith Wilson, Stanley Hasty, and Charles Neidich. He is Professor of Music and Distinguished Scholar at Southern Illinois University at Carbondale, where he teaches clarinet and graduate courses in musical analysis.

Eric Mandat is a Buffet-Crampon USA performing artist and clinician.